US teacher gets 15 yrs for seducing BZ minors via Facebook 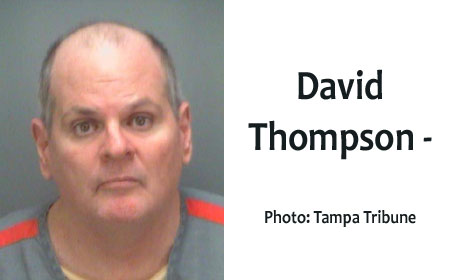 BELIZE CITY, Wed. May 6, 2015–David Wendel Thompson, who was nabbed by US law enforcement authorities in Miami while trying to fly to Belize, has been sentenced to 15 years in Florida, USA, after having pleaded guilty to enticing two Belizean minors, ages 13 and 15, via Facebook.

He had apparently been in contact with the Belizean girls between December 2013 and February 2014. He took a flight to Belize on March 14, 2014, but was denied entry when he got here, and US law enforcement personnel arrested him when he returned to Miami.

When US law enforcement searched his checked bag, they reportedly found condoms, a drug for erectile dysfunction, two brand new computer tablets (said to be gifts for the minors) and fliers for a hotel in Belize.

Thompson, 49, had been working as a social studies teacher at a primary school in Florida. Months before he began communicating with the Belizean minors online, he had also married a young Belizean woman from southern Belize. An August 2013 notice carried in a local newspaper said that he had married Claudine Crusita Montes, 21, of Dangriga, Stann Creek.

According to The Tampa Tribune, Thompson said in court Wednesday upon his sentencing that he never acted inappropriately towards any child when he was a teacher, and he claimed he never would have acted on his chats with the girls in Belize.

“I thought everybody lied on Facebook,” Thompson said. “I didn’t believe it was real.”

However, Assistant U.S. Attorney Jennifer Peresie said Thompson was interviewed three times by Homeland Security agents—once at the airport in Miami on his way to Belize, once in Belize and upon his return to Miami—and he had never before claimed this was only fantasy. Instead, she said, he justified his plans and told agents it was legal in Belize to have sex with girls as young as 16, but that he planned only to have sex with 18-year-olds.

According to Peresie, Thompson carried out an elaborate ruse in which he created the persona of Iris Levy, a Belizean girl, who told the minors about “Big Dave,” who came from the United States and spent a lot of money. Iris introduced them to Thompson on Facebook. Peresie claimed that the conversations Thompson had with the two victims were graphic, and he also tried to persuade one of them to send him photographs of her genital area.

After Thompson’s arrest last March, the US Immigration and Customs Enforcement’s (ICE) Homeland Security Investigations (HSI) issued a statement confirming that he was to be prosecuted by the U.S. Attorney’s Office for the Middle District of Florida, following a criminal complaint alleging that Thompson used Facebook to attempt to knowingly persuade two minor females from Belize to engage in sexually explicit conduct. ICE also said that Thomspon could face a mandatory minimum sentence of 10 years and a maximum penalty of life in prison if convicted.

Media reports in the US said that Thompson had been in Belize 9 times since 2011. He had apparently picked up enough of the local lingo, Kriol, to take on the persona of a Belizean teen girl online.

In a part of the conversation published by The Tampa Tribune, Thompson, posing as Iris Levy, told the 13-year-old: “if u give yourself to dis man…he will neva forget dat and b there for as long as u want him. Save it for him cause d man take care of u.”

The girl told Thompson that she was worried, because she was only 13. Thompson wrote: “U promised I could be your first and I felt special…will you still let me?”

His plea agreement indicated that Thompson subsequently wrote: “i will make sure u always have money…it hurts i want to do so much for u i need u to give back a little.’’

Thompson’s own lawyer, Matthew Farmer, said the late night chats were fueled by alcohol and drugs over a three-month period, between December 2013 and February 2014.

After his release from prison, Thompson will also be on 10 years’ probation.

Just last week, we reported on the arraignment of Troy Pertuset, a US national who had skipped probation in the US, and who was attempting to enter Belize via Mexico, allegedly to have sex with a 16-year-old Belizean girl he had met online. Pertuset was denied entry back in March when he tried to use a fake Canadian passport to gain entry into Belize, and he was flown back to the US to face charges there.