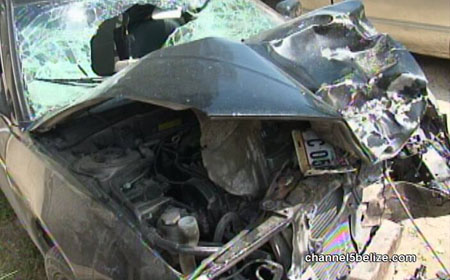 BELMOPAN, Mon. Feb. 9, 2015–Two men died in an early morning road traffic accident involving a motorcycle and a car, which occurred on the Hummingbird Highway near Belmopan in the early hours of this past Saturday morning.

Police said that at about 1:50 a.m. on Saturday, February 7, Leonardo Ramos, 26, of #15 Calle Las America Street, Salvapan, Belmopan, and Rigoberto Leon Cabrera, 18, of Saint Andrew’s Street, San Martin, Belmopan, were traveling on a blue SKYGO motorcycle between Miles 54 and 55 on the Hummingbird Highway when they collided with a black Mitsubishi Galant car driven by Daniel Cunil, 24, of #22 Nargusta Street, Belmopan, that was going in the opposite direction.

Both men on the motorcycle sustained massive head and body injuries and died at the scene. Their bodies were transported to the Western Regional Hospital morgue, where they are to undergo a post mortem.

Cunil, who complained of a pain in the neck after the accident, has since been arrested and charged with two counts of manslaughter by negligence and two counts of causing death by careless conduct, as well as driving a motor vehicle without due care and attention, and driving with alcohol concentration above the prescribed limit.