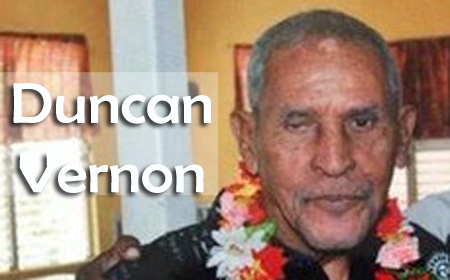 BELIZE CITY–The Cycling Federation of Belize would like to express its sincerest condolences to the family, friends and fans of Mr. Duncan Vernon.  Mr. Vernon was the Annual Cross Country Classic Champion for 1957, 1960 and 1961.  As a great cyclist, he also challenged the riders and placed second in 1954, 1956, 1958 and 1965.  A cycling legend in his time.

His funeral service will be held on Saturday, January 17, at 12:00 noon at the Wesley Methodist Church on Albert Street.  His body will be laid to rest at the Homeland Memorial at Mile 7 on the George Price (Western) Highway.

All members are asked to attend his funeral services and in their jersey or team uniform.  May his soul rest in peace and ride in glory.

On behalf of the Cycling Federation of Belize, we again express our sincere condolences.
– press release –

(Ed. Note: From the sports desk and all of Kremandala we also extend our sincerest condolences to the family of a great Belizean champion.)