6 months in prison for theft with a firearm 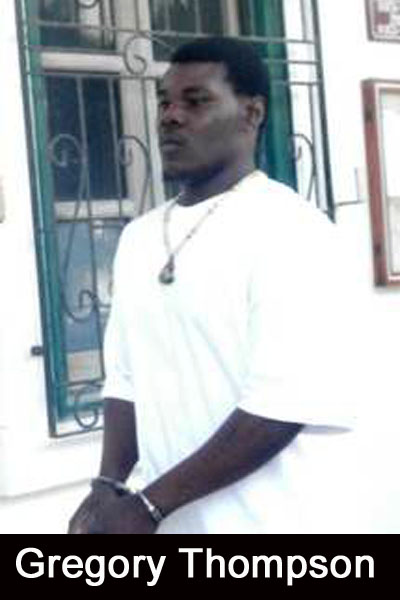 Gregory Thompson, 21, found guilty of robbery with a firearm

Today, Gregory Thompson was found guilty of robbery with a firearm in the courtroom of Chief Magistrate, Ann Marie Smith.

In the trial which started and ended today, one of the three victims, 17 years at the time, told the court that on November 7, 2011, he, his two friends and others were at the La Democracia bus stop waiting for a bus to come.

Thompson, he claims, then came and began eating a bag of chips with his back to the crowd. After half of the group caught a bus to “Malantee” (Gales Point, Manatee), only he, his two friends, Thompson and two others were left out there.

Then Thompson pointed the gun into the witness’ face, and took away his cell phone, then told him not to say anything.

Thompson then rode off toward Mahogany Heights on his bicycle, leaving the trio there shocked at what had just occurred.

But because the witness had known Thompson for at least ten years, since they had attended primary school together, he was able to tell police exactly who it was that had robbed them.

Quick work by the officer stationed at the Mahogany Heights Police Sub-station, PC Lincoln Alvarez, resulted in the detention of Thompson only minutes after the robbery had occurred. According to his testimony, when the three victims saw him and another young man in the back of the police vehicle, they all indicated that Thompson – the big one – had robbed them earlier.

Thompson had a different recollection of what occurred that day – according to him, he was at home washing dirty dishes, after which he took a chicken out of his freezer, and proceeded to the shop to buy seasoning.

He testified that after buying his seasoning, he was standing talking to his friend when he saw the police coming toward them. The police then informed him that he was wanted in relation to a robbery that had taken place earlier.

The Chief Magistrate did not believe his tall tale and found him guilty of the charge. He was then sentenced to 6 months in prison, effective today.

After the trial, Amandala spoke with the victim, who wished to be anonymous, but expressed his shock and displeasure with the lenient sentence given to Thompson, especially since it was a robbery that was committed with a firearm.

Thompson was unrepresented and the prosecutor was Sgt. Dennis Miles.