Barrow fires back at Briceño at conclusion of budget debate 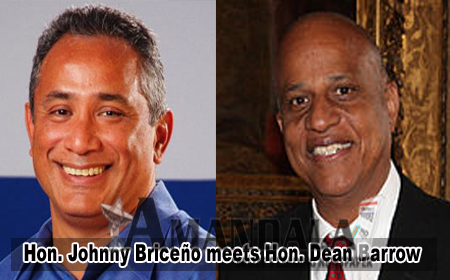 Briceno had said that instead of Belizeans getting a tax relief in the 2016 budget, they have gotten a $50 million “tax whop” on import duties charged on fuel at the pumps. He said that this will further erode the purchasing power of Belizeans, who are being charged, on average, 40 cents out of every dollar in “direct taxes.”

Barrow said that Briceño used “an outrageous sleight of hand that requires a scolding from the Minister of National Security [John Saldivar], who is the only true economist in this House.”

He went on to say that when it came to the Statistical Institute of Belize (SIB), the Leader of the Opposition cited them and their data with approval when it suited him.

For GDP growth in the last two quarters of 2015, said Barrow, “he was quick to say ‘this is what the SIB said’ and they obviously are right. He used that to determine, fine economist that he is, that we are in a recession, but when it came to the unemployment figure, similarly documented by the Statistical Institute of Belize… that they confirmed that unemployment… is the lowest it has been in a decade, that doesn’t suit the Leader of the Opposition, so he quarrels with it….

“Again, Mr. Speaker, the Leader of the Opposition had, in seeking to manipulate things, had the effrontery, the nerve, the gall, the temerity to talk about debt and to say by way of complaint that the debt to GDP ratio under the UDP is now almost 80% – neglecting to say that when they left office, it was 92%. We took it down,” said Barrow.

In answer to assertions that the UDP is taking the debt back up, Barrow said “…because of the borrowings from PetroCaribe. I hope the three economists in the House [earlier he had said that Saldivar is the only “true economist” in the House] will invite him [Briceño] for a private session and explain to him the simple fact that if you can borrow on concessionary terms, if you can borrow on super-concessionary terms, I don’t know of any other arrangement, any other international facility, where you can get 1% money over 25 years,” said

Barrow, adding that an article in the Financial Times had made the point that borrowing on those terms is “almost like a gift…”

In his presentation on Tuesday, Briceño had said that there is “no boldness” in Barrow’s 2016 budget, the 8th under his administration, representing a total of $8 billion over 8 years.
“The real picture is that Belizeans will take hit and even bigger licking next year when the step up on super-bond is due,” Briceño said.

“The Leader of the Opposition had the nerve to say, ‘Watch what will catch us when step-up on the super-bond overtakes us and when a year or so later we will have to start paying back the principal! Well whose super-bond it is? Who contracted that super-bond?” Barrow retorted.

He said that his administration “was trying to consolidate all the serial disgraces that formed part of the fabric of their [the Opposition’s] borrowing pattern…” from names that were unknown to Belizeans – Solomon, Smith Barney, Bear Stearns, KZ Bank, IBOM – the International Bank of Miami, at 13% interest.

Barrow said that it had been documented by the very same Bear Stearns, which has since gone belly-up, that “$200 million had gone missing from what they [the former PUP administration] borrowed…”

Briceño also made the point that Belize’s export sectors are in trouble, with further contraction forecasted for major agro-producers. He said that the Belize economy is in recession, and the Barrow administration is “clueless” about how to fix one of the key pillars of economic growth.

Barrow replied: “They talk about what’s happening in the agro-productive sector. Again, I hope that the Leader of the Opposition, in his readings, will come to the recognition that commodities are always cyclical. They are vulnerable, they are cyclical.”

“We are at a point in the cycle now where the vulnerability of our commodities has been shored up, but as a consequence of what? Disease. All sorts of reasons beyond our control,” Barrow rebutted.

Speaking again on the tax issue, Barrow said that the Ministry of Finance technicians “wanted to do all sorts of things with GST [General Sales Tax] in this budget,” moving items that are now exempt from the tax to fully taxable, “but we in Cabinet knew that that change would fall particularly hard on agro-producers in this country and so we said ‘no,’ and we will continue to say ‘no,’” he said.