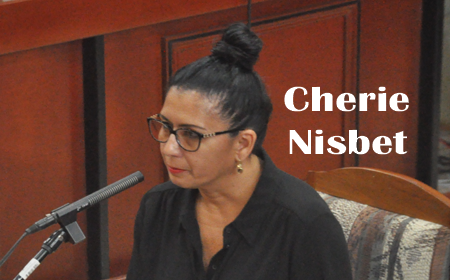 BELMOPAN, Wed. May 31, 2017–The Senate Select Committee investigating the Auditor General’s report on irregularities at the Immigration Department between 2011 and 2013 met today in Belmopan at the National Assembly building after its hearing last week was postponed due to the tension created by UDP chairman Alberto August and Macebearer Brian “Yellowman” Audinett, who behaved in a disruptive manner in the last hearing.

Surprisingly, Ambassador Nisbet testified that no one from the Belize office in Taiwan ever attempted to contact a Honduran diplomat, Alejandro Young, through whom Belize City Deputy Mayor Eric Chan said, he had gotten to know Korean criminal Won Hong Kim.

The facilitation of Kim with a fake Belize passport led to the Elvin Penner passport scandal, which rocked the Barrow Administration in September 2014.

When Ambassador Nisbet was questioned by the Business Senator, Hon. Mark Lizarraga, why she at no point asked Young how he came to have a Belize passport in his possession, she replied feebly, “I just didn’t ask; I’m not sure why.”

“A foreign national in a foreign country where you are posted as the ambassador from your country, and this foreigner comes up with your country’s passport, and you have expressed not the slightest bit of curiosity about that?” asked Lizarraga.

“No,” Nisbet replied — she was not curious.

“Did anyone from your Embassy or from the Ministry question the Honduran Chargé d’affaires Young to find out how he came to be in possession of Kim’s Belizean passport?” Senator Lizarraga pressed on.

“Do you find that strange that nobody inquired, including yourself?” asked Senator Lizarraga

“I don’t remember anybody inquiring, and I don’t find it strange that I didn’t ask, no,” Ambassador Nisbet responded.

The inquiry thus confirmed that Ambassador Nisbet had been given the Won Hon Kim passport and Belizean nationality certificate and incredibly enough, she did not inquire why the person holding a Belizean passport was in prison in Taiwan.

Chairman Aldo Salazar asked Ambassador Nisbet what she did with the Won Hong Kim passport and nationality certificate. She said she held on to it until it was requested that it be sent to Belize in 2015, but she does not remember the exact date the Ministry of Foreign Affairs asked that the passport be sent back.

The Won Hong Kim Belize passport and nationality certificate would have been the smoking gun with which charges could have been brought against Elvin Penner for the offences against the Belize Nationality Act and the Belize Passport Act. That passport was returned to the country and if the Commissioner of Police had obeyed the Chief Justice’s Mandamus order to investigate the Won Hon Kim matter, the police would have taken possession of the passport for evidentiary purposes.

The passport was given to Immigration Minister Hon. Godwin Hulse when he visited the Belize Embassy in Taiwan, Ambassador Nisbet told the Senate Select Committee; it may have been in early 2015, but she was not sure.

Ambassador Nisbet told Senator Eamon Courtenay that she didn’t recall how long she had known the Honduran diplomat Young, who she said was not a trustworthy person.

Ambassador Nisbet said she didn’t remember whether she had gotten further instructions from the Ministry of Foreign Affairs with respect to the Won Hong Kim matter.