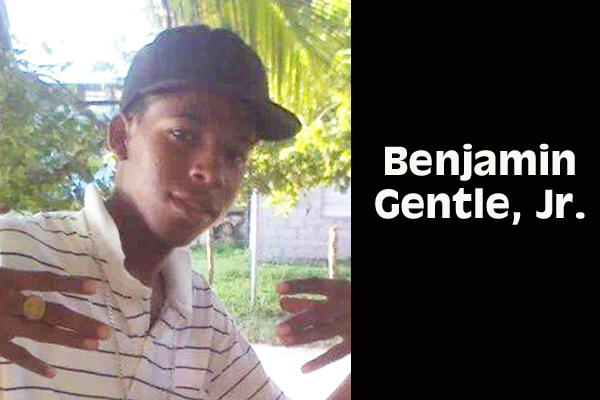 The Gentle family of Crooked Tree Village is today mourning the death of their son, Benjamin, Jr., 20, who was killed in a two-boat collision at about 5:30 a.m. on Friday morning in the Crooked Tree Lagoon.

The Coast Guard was assisting over 500 villagers daily to access the road because floods, for the last three months, have devastated the causeway linking Crooked Tree to a road leading to the Northern Highway. The boats also assisted in transporting goods and other necessities for the village.

In addition to suffering huge chop wounds to his shoulder, under his right arm and on the right side of his lower back, Gentle sustained massive injury to his midsection and died almost immediately. Gentle was declared dead on arrival at the Karl Heusner Memorial Hospital.

The community nurse said that some of the injuries that she observed on the students included a back injury and cuts. She noted that one student suffered from a dislocated knee, while a girl suffered a blow to her head, among other injuries.

Deputy Commandant of the Coast Guard Elton Bennett told Amandala that a full investigation is being carried out into the tragedy by three agencies – the police, the Coastguard, and the Port Authority – but they are looking at mechanical failure and human error as the causes of the accident.

He said that their initial investigations revealed that the two boats involved in the incident – a 37-foot boat with twin 250HP engines, and a smaller 18-foot boat – belong to the Coastguard. They were conducting regular shuttle services in the Crooked Tree Lagoon, transporting passengers to and from the village. One boat was returning back to Crooked Tree after dropping off passengers, and another boat, carrying nine students and Gentle, was heading to the causeway to drop off passengers.

The information Amandala has received is that the two boats were to meet so that a transaction could occur between the captains. The larger boat approached the smaller boat from the rear at an angle, but failed to stop, and the captain was trying to put the engine in reverse to slow down the boat, but instead of going into reverse, the engine’s gears malfunctioned and the boat lurched forward, slamming into the smaller boat.

Everyone onboard the smaller boat was injured.

All had gone well until the tragic incident occurred. The residents of the village were so pleased with the service that a party was to have been held for the Coast Guard on Saturday to show their appreciation, but in view of the accident, it has been postponed.

The Deputy Commandant, after expressing his dismay about the collision, said that they stand ready to continue to support the people as long as they are needed. He believed that in about two more weeks, the road would have been passable, since the water is receding at an inch per day. He said that the vessels consumed about 250 gallons of fuel every 2 weeks. The daily shuttle began at about 4:30 in the morning, up to about 8:30 in the evening (the boats have lights).

The Hon. Edmund Castro, the area representative who was present on the scene, said that although nine students are known to have been injured, the medical authorities have not yet given a report on their injuries.

Castro said that all will be done to help the students with medical issues, including specialist treatment if necessary.

He said that the Ministry of Works will begin repairs on the road as soon as the water recedes. The road repairs should have begun already, but the floods and continuous rain prevented the work. Presently, the water has a depth of about 17 inches on the road, so they must wait for it to go down.

The Ministry of Education sent nine counselors to assist the traumatized students, as well as 20 students who witnessed the accident, and the family of Gentle, to cope with the traumatic experience.

Verla Jex, one of Gentle’s former teachers, said that he was a good student who did very well on the national exams and graduated with honors from E. P. Yorke High School. He was also an outstanding poet, she said, and he participated in the Festival of Arts, in which he got awards for a poem he presented, known as the “Banana Man.”

Despite many hardships, Gentle did consistently well, said Jex, and after he graduated from E. P. Yorke, there was no money to send him to sixth form, so he got a job and was saving money to finance his further studies.

Inez Gentle, Benjamin Gentle, Jr.’s brother, said that he was at home when he got a text on his phone which informed him that his brother had died. He rushed over to the area to see what was happening, but he was not allowed to see his brother, whose body had been covered, and was in the boat.

They had been close, like twin brothers, he added.