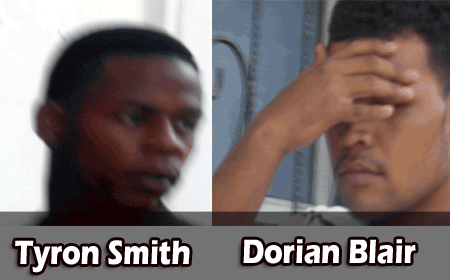 BELIZE CITY, Fri. Apr. 22, 2016–Security officers and residents of the city can breathe a sigh of relief after two fake cops were busted. At the time they were found, one of the two imposters was carrying a .38 Special revolver loaded with 6 live rounds. The counterfeit policemen have been taken into custody and detained.

The criminals were found wearing the pants that are typically worn by policemen on duty, along with khaki shirts, and after investigation, they were found to be imposters. The fake cops were charged for impersonating police offiicers and were additionally charged with keeping a firearm and ammunition without a gun license. They have been detained pending arraignment for the offenses.

The incident occurred at about 5:30 this morning, on Ebony Street, Belize City. Police reported that they were on mobile patrol on Ebony Street when they saw two men wearing pants that are usually worn by police officers. One was also wearing a black jacket over a police khaki shirt and a pair of boots.

The other was wearing an orange jacket, also over a police khaki shirt, and a pair of boots. Both were questioned when it was discovered that they were not police officers.

A search of the men led to the discovery of a black .38 Special revolver containing (6) .38 live rounds tucked in the waist of one of their trousers.

Police announced that the counterfeit cops were identified as Dorian Blair, 21, a tour guide of 89 Gibnut Street, and Tyron Smith, 21, a BDF volunteer of St. Matthews, Cayo District.

They were both charged for impersonating a police officer. They appeared today, in front of Chief Magistrate Ann Marie Smith, and the charges were read to them, to which both of them pleaded not guilty.

Smith was additionally charged for a .38 special revolver, six .38 live rounds, five .38 rounds, S&B brand, and one Aguila round for which he does not have a gun license.

The matter was then adjourned to July 4.

In February two thieves posing as policemen went to a cable company in Belize City, where they robbed the security guard of his firearm under the pretense that they had gone to the office to conduct inspection on the firearm, that had been issued to him (the security guard), after which the two fake cops locked up the guard in the office and escaped with the gun.

Another incident occurred in the Antelope Street Extension area, around 8:00 p.m. that Friday. A school warden told police that she was at home when her common law husband told her that the policemen were at the door. She got up and went to see what was happening, and opened the front door and saw three men dressed casually. One of the men asked for her son.

The woman closed her door to go inside, and the men told her that they were policemen and wanted to enter the house to conduct a search. They then kicked in her gate and pushed open the door, and walked into her house. One of them threatened her and told her that he was armed and raised his shirt, and showed her a pistol which he was carrying under the waist of his pants.

He then told her to warn her son not to disrespect his brother, because he would return. The three men then walked out of the house, and rode off on their bicycles onto Antelope Street Extension towards Central American Boulevard.

The police were called, but although the police officers who arrived on the scene conducted a search in the area, the men were nowhere to be found.

In April 2014, a Belize City engineer escaped with his life after he was held up at gunpoint and shot in his leg by two bandits who posed as policemen, and who stole his vehicle.

The victim told police that he was travelling from Spanish Lookout Road to the Western Highway, on the route to Blackman Eddy Village, in his Toyota Hilux 2009 pickup, and when he reached an area near Iguana Bridge, he came upon a roadblock being manned by two men dressed in police uniforms, who waved at him to stop.

They approached and identified themselves as policemen. They then ordered him to get out of the vehicle, and one of the men pulled out a gun and pointed it at him. The victim quickly struggled with them, trying to get the gun from the bandit, but was shot in his leg. He still managed to escape and ran into the bushes. The bandits did not chase him, but instead, drove away in his pickup.

Police believe that the motive was robbery.

The victim was treated and released from the hospital, and his vehicle was recovered in the Mountain Pine Ridge, Cayo District, the following day on May 1, by San Ignacio police.
The victim said that the counterfeit policemen were well-dressed and the gun one of them was carrying was a 9-mm Glock pistol.