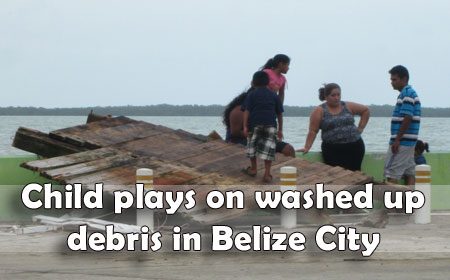 BELIZE CITY, Fri. Aug. 5, 2016–The frightfulness of howling winds and pounding rains emanating from a fierce hurricane such as Earl is enough to traumatize a child. In fact, according to a report released today by the United Nations’ Children’s Fund (UNICEF), three-fourths of Belize’s children, amounting to more than 110,000 children, 27,000 of them being younger than age 5, were affected by Hurricane Earl.

The hurricane struck Belize on Wednesday night and early Thursday morning with its impacts being felt along a span of about 150 miles, covering most of Belize, with impacts concentrated across four of Belize’s six districts.

UNICEF said that it has conducted an initial assessment of damage caused by Earl in some of the most vulnerable communities located in Southside Belize City.

“Staff members on the ground reported that hundreds of families have been forced to seek cover with relatives, neighbors or in government shelters. Many families have lost their houses and belongings to flash flooding and winds of up to 80 mph,” it added.

Although many families sought cover before the storm hit, some felt forced to stay in their homes as they feared for their children’s safety in community shelters due to the level of alcohol consumption and crowds,” the UNICEF report said.

“However, now that their houses have been destroyed, they have been left with no choice but to stay in these shelters,” it added.

“Our urgent priorities are to get children and families who have lost their homes into a safe child-friendly environment where they can access clean water, and get children back to learning,” said Yerovi.

UNICEF notes that, “Lack of access to clean water, poor sanitation, and the risk of mudslides, along with sightings of alligators and snakes in flooded areas, threaten the safety of the country’s most vulnerable children.”

UNICEF said that it has been working around the clock to give children and families who have been cut off from basic services access to clean water, sanitation and hygiene.