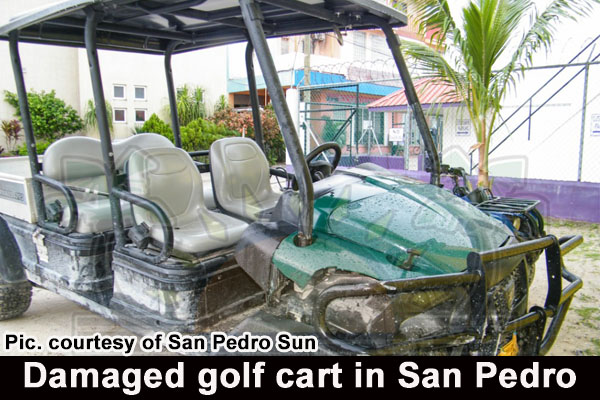 Two people hurt in the collisions, one seriously

Two people who were riding in a golf cart in San Pedro escaped with their lives after the cart they were in collided with the side of another golf cart, then ran into a fence, before crashing into the side of a building, knocking off a portion of the building’s exterior.

Maheia was rushed in an unconscious state to the San Pedro Poly Clinic II, and later taken to the Karl Heusner Memorial Hospital. She suffered injuries to her face, mouth, teeth and left leg, and her left ear was severed. Doctors said that reconstructive surgery will be needed for Maheia’s face.

Guerra suffered a broken left hand and complained of pain in the chest.

The incident occurred at about 2:30 Friday morning on Barrier Reef Drive and Caribeña Street.

Mathias Cunil, 30, of Succotz, the driver of the Polaris golf cart, was arrested and charged by San Pedro police for the offenses of driving a vehicle without due care and attention, driving a motor vehicle with alcohol above the prescribed limit, and two counts of negligent grievous harm caused to Maheia and Guerra.

Police said that the cart then reversed and hit the fence that surrounds Heritage Bank, and the driver then drove away from the scene.

Police pursued the fleeing driver, who then slammed into the Belize Bank Building at the corner of Caribeña Street and Barrier Reef Drive, knocking off a portion of the building’s edge.

Police overtook the Polaris in front of the police station and blocked its path. The driver was immediately arrested and taken to the San Pedro Police Station, but he was unhurt. He was identified as Mathias Cunil, an employee of the Belize Agriculture Health Authority (BAHA), attached to the San Pedro Branch.

Maheia and Guerra were rushed to the San Pedro Clinic, before Maheia was rushed to the Karl Heusner Memorial Hospital. Guerra was treated and later released.

Police said that the Polaris golf cart is the property of the Government of Belize, issued to the Belize Agriculture Health Authority.

Urine samples were taken from the driver and sent to a forensic laboratory for analysis.