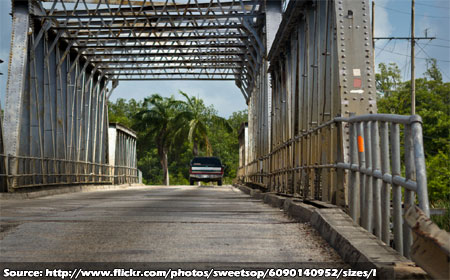 In presenting the loan motion to Parliament, Minister of Finance, Prime Minister Dean Barrow, said that the loan would include climate adaptation works.

The loan repayment schedule is complex, since it would be released in multiple tranches which carry varying interest rates, as well as different repayment schedules. The funds should be fully disbursed by the end of 2018.

The portion for $13,740,000 should be repaid in 48 quarterly installments, after a 3-year grace period, at a rate of 3.59% per annum. There is a 1% per annum commitment fee on the unwithdrawn portion of loan.

Finally, special funds totaling $3,479,000 would be repaid with 80 quarterly installments after a 5-year grace period at 2.5% per annum.

Opposition Leader Francis Fonseca said that while there is no denying the Haulover Creek Bridge is badly in need of replacement, he wanted to place on the record once again the issue of equitable allocation of resources across the country.

Fonseca said that $60 million will be spent in the Belize District on worthy projects, but in many rural communities, there is no water or electricity; the infrastructure is in a deplorable condition; health centers are falling apart; and children can’t go to school because buses don’t go into their communities due to poor road conditions.

The Opposition Leader reiterated that there needs to be greater equity in the allocation of resources.

His comments were endorsed by Toledo West area representative for the Opposition People’s United Party (PUP), Oscar Requeña, who said that constituencies in southern Belize are clamoring for Government to ensure that the resources are distributed in a more equitable manner.

Requeña said that he received a call out of San Vicente just this morning to say that the bus cannot transport people from the village because the roads are so bad. He said that the situation is the same in the villages of Dolores and Crique Sarco.

“Please man, give attention to these areas that have been abandoned for the last 7 years,” Requeña said.

Dangriga area representative for the PUP, Ivan Ramos, spoke about the need for the Government to ensure quality.

“$60 million is not a little bit of money, so we want to ensure… we want to insist and go on record [to say] that we demand quality work for the monies being expended,” Ramos said.
After this loan motion was discussed, Barrow rose to detail a second loan motion: the Alba PetroCaribe motion, which was not passed in today’s sitting of Parliament to allow for a more extensive review.

Barrow noted that back in September 2005, Belize and Venezuela entered into a bilateral energy cooperation agreement, in line with the regional PetroCaribe initiative, under which that country would export crude oil, refined products and LPG (up to 4,000 barrels per day on an annual basis) to Belize.

He explained that Petroleos de Venezuela S.A. (PEDEVESA) supplies the products, subject to certain terms and conditions, via a joint venture agreement between the two states. Belize repays 50% of the cost on a 90-day cash basis and the other 50% is financed over 25 years, under a program that allows the country to use the retained proceeds for initiatives such as social projects. Barrow said that since 2012, the financed portion, which will be repaid at 1%, has amounted to US$114,307,356.

Section 7.2 of the Finance and Audit Reform Act requires a resolution of the National Assembly to authorize such borrowing, and so today’s loan motion was intended to fulfill that requirement.

Barrow said that some media personnel and social activists have suggested that his administration has not been utterly transparent in its use of the PetroCaribe money, but stated that the charge is not true. According to Barrow, the details of the transactions are made public via the Government’s website, as well as the Central Bank of Belize’s website. He said that details are also published in the budget.

According to Barrow, 70% of the retained proceeds are held with the Central Bank, propping up the country’s foreign reserves, while 29% is wholly uncommitted. That includes funds for the National Bank ($20 mil), municipal streets and roads ($37.5 mil), and social support and assistance ($9.4 million).

He also indicated that the fund could also be used to help pay compensation to the former owners of Belize Telemedia Limited and Belize Electricity Limited, which have both been nationalized by the Government, although a final round of litigation is pending at the Caribbean Court of Justice over the constitutionality of the nationalizations.

The PetroCaribe bill was sent to the relevant House Committee for wider review and refinement before its return to Parliament for second reading, debate and eventual passage.