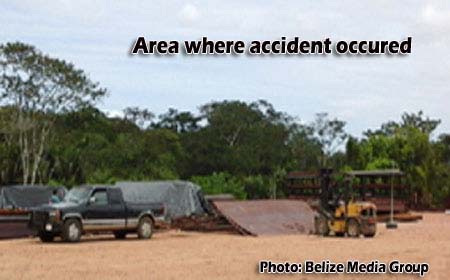 SPANISH LOOKOUT, Fri. Feb. 6, 2015–A laborer who had recently been employed by a steel company in Spanish Lookout, Cayo District, met a bizarre and untimely death today after being crushed to death by a 4,000-pound metal plate while on the job.

According to Superintendent Thompson, Roman Ku, 38, of August Pine Ridge, Orange Walk District, was standing on top of some 8’x20’metal plates that were being conveyed on a forklift when he suddenly fell of the plates, after which one of the plates also fell, and landed on his upper chest area.

Ku – who, we understand, had just started working for the steel company this week – died on the spot, and after the scene was processed by police, his body was taken to the San Ignacio Town Hospital, where it is to undergo a post-mortem exam.

Thompson mentioned that while the death has been ruled as an accident, their investigations into the incident continue.

Police reportedly took statements from other employees who were present at the time of the incident, including the driver of the forklift, Henry Reimer, 64, who is one of the owners of the company.

Those statements, and the results of a post-mortem exam that is scheduled to be conducted this evening at the San Ignacio Hospital morgue, will be sent to the Office of the Director of Public Prosecutions for advice on whether any charges will be levied.