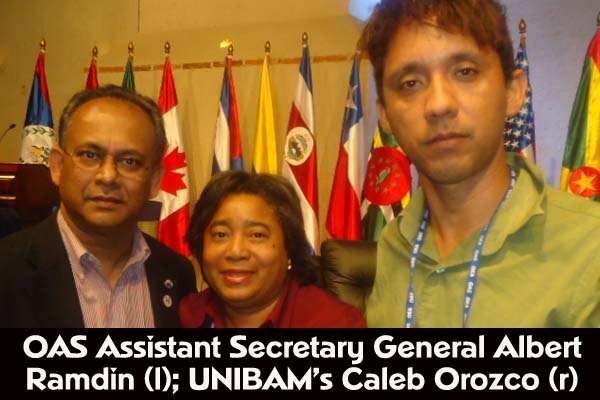 The Organization of American States (OAS), the world’s longest-standing hemispheric organization, opened for signing today, two legally-binding instruments: the Inter-American Convention on Racism, Racial Discrimination and Related Forms of Intolerance; and the Inter American Convention Against All Forms of Discrimination and Intolerance—the latter of which reflects the hotly debated shift from including merely one’s “sex” to including one’s “sexual orientation” under provisions guaranteeing fundamental rights and freedoms.

Back in 2004, when United Nations countries debated the UN Convention on the Rights of People with Disabilities, there was a proposal by Canada to include “sexual orientation” in the preamble; however, the proposal was rejected after debate and the original language was retained in that convention.

Since then, though, the language of texts addressing fundamental human rights have changed—in the same way that the language in Belize’s gender policy—a document funded by the UN—has changed to now include sexual orientation of persons and anti-discriminatory provisions.

The Inter-American Commission on Human Rights (IACHR), an organ of the OAS, defines sexual orientation as “each person’s capacity for profound emotional, affectional and sexual attraction to, and intimate and sexual relations with, individuals of a different gender or the same gender or more than one gender…”

Whereas the talk has customarily been about LGBT persons – lesbians, gays, bisexuals and transgender, a release issued by the OAS this week, reporting on talks at the 43rd General Assembly in Antigua, Guatemala, made reference to LGBTTTI persons, defined by the International Gay and Human Rights Commission to mean lesbian, gay, bisexual, transvestite, transsexual, transgender and intersex.

Incidentally, the signing of the conventions coincides with what has been dubbed “LGBT Pride Month.” A press statement issued on Tuesday, June 4, 2013, by John Kerry, the US Secretary of State who was also present at the OAS meeting in Guatemala, said “…we see incredible progress in the fight to advance the human rights and fundamental freedoms of LGBT people, both here in the United States and globally.”

Kerry’s statement goes on to say that, “LGBT persons must be free to exercise their human rights—including freedom of expression, freedom of religion and freedom of assembly and association—without fear of reprisal.”

It is against this backdrop that the two conventions were passed today, and whereas Belize did not sign—since Minister of Foreign Affairs Wilfred Elrington did not have an official mandate from the Belize Government to do so—UNIBAM’s spokesperson, Caleb Orozco found the moment celebratory.

On his online blog, Orozco, who claims that UNIBAM ”has been going to the OAS attending Latin American and Caribbean meeting since 2007 shaping the Coalition declaration” wrote:

“I learned that Belize, Jamaica and Barbados were giving some trouble on the Sexual Orientation and Gender Identity Resolution, after some further engagement around the region, which was not a guarantee of success, I heard at 6:05 p.m. [Wednesday] our resolution was adopted. Amen to that news and I screamed in relief.”

Speaking with the Belize media today, Thursday, Elrington said “Belize has not signed on to [the conventions] because we don’t sign on to any of these things until we go back to Cabinet, report and get consent to sign.”

When the resolution was adopted the day before, said Elrington, Belize abstained from voting.

Haiti, Brazil and Costa Rica manifested their willingness to ratify the conventions once signed.

At a press conference, Guatemala’s Foreign Minister Fernando Carrera Castro addressed the media on the conventions.

First speaking generally on the broader scope of the human rights conventions, Carrera said, “…this is a very important topic due to ethnic considerations. This is an important topic because it is a continent where there has been exclusion based on ethnic condition against afro-descendants and indigenous peoples, and even simply against people of a color which is not the dominant one in this continent which tends to be of European descent…”

On the question of whether the approved conventions could spark a new wave of gay marriages, Carrera said: “I don’t think that we are approving this to thereafter approve gay marriage. I don’t think that that is the consequence of the convention. I think the interest is to eliminate forms of discrimination and not to introduce legal reforms on how we understand marriage. I think they are different matters.”

He added that “…aggression, violence – verbal or physical – against persons who have a sexual orientation of whatever kind – heterosexual, bi-sexual, transsexual – well obviously it is considered in these conventions as a violation of human rights.”

The text of the draft convention which Amandala has obtained via the OAS explains what it means by discrimination and intolerance, and it does not address acts of violence.

“Intolerance,” it says, “is an action or set of actions or expressions that denote disrespect, rejection, or contempt for the dignity, characteristics, convictions or opinions of persons for being different or contrary. It may manifest itself as marginalization and exclusion of vulnerable groups from participation in any sphere of public or private life or violence against them.”

This language goes beyond what is contained in the Belize Constitution, which says the people of Belize “…require policies of state which protect and safeguard the unity, freedom, sovereignty and territorial integrity of Belize; which eliminate economic and social privilege and disparity among the citizens of Belize whether by race, ethnicity, colour, creed, disability or sex; which ensures gender equality…”

The language of Belize’s Constitution reflects that in the 1948 human rights instruments dubbed the Universal Declaration of Human Rights and the American Convention on Human Rights.

The OAS report on Tuesday’s proceedings with civil society, attended by UNIBAM spokesperson, Caleb Orozco, said that in addition to civil society representatives commenting on issues such as the rights of drug addicts, the risks of drug use, the rights of people of African descent, and the high human cost of the “war on drugs,” the rights of the LGBTTTI community and the criminalization of various sexual acts in certain countries of the Americas were also discussed.