2 brothers chop up uncle, then beat grandpa with stick 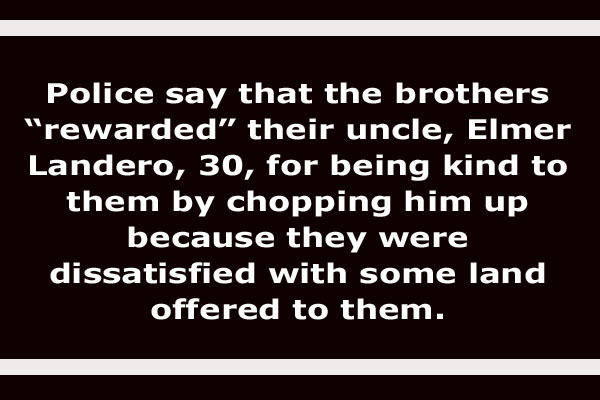 Two brothers, Enoch, 18, and Darrington Landero, 35, of Santa Familia Village, were remanded yesterday, Wednesday, to the Belize Central Prison until December 5 by Magistrate Lindbert Willis in the San Ignacio Magistrate’s Court on charges of maim, attempted murder and aggravated assault.

Police say that the brothers “rewarded” their uncle, Elmer Landero, 30, for being kind to them by chopping him up because they were dissatisfied with some land offered to them.

Their uncle is now recovering at the KHMH with chop wounds to his hand, arm and head.

Police said that around 9:00 a.m. on Sunday, September 30, in Santa Familia, Enoch and Darrington, after an argument, chopped Elmer in the head, cracking his skull, and when he fell, they continued chopping him, severing his right hand and chopping his left hand so that it hung by only a piece of skin from the elbow down.

After chopping their uncle, police say, Darrington then beat their grandfather, Domingo Landero, 80, in the back with a stick until he fell, after which they ran away.

Police said that Elmer and his father went to their farm in the village to share some land with his two nephews, Enoch and Darrington, but they were not satisfied with the land they were given. An argument then ensued, and that was when the chopping and beating happened.

Alarmed villagers came to see what was happening, and quickly called police. Elmer was rushed to the San Ignacio Hospital, then rushed to the Karl Heusner Memorial Hospital for further treatment, where he has been admitted to ward in a serious but stable condition.

Police launched an immediate search for the brothers, who went into hiding, but the villagers cooperated and their whereabouts were reported; they were captured by police around 5:30 a.m. on Tuesday morning, October 2, when they came out of some bushes.