The men are expected to be charged for drug offenses following the recovery of over 1,200 pounds of cocaine in the area. 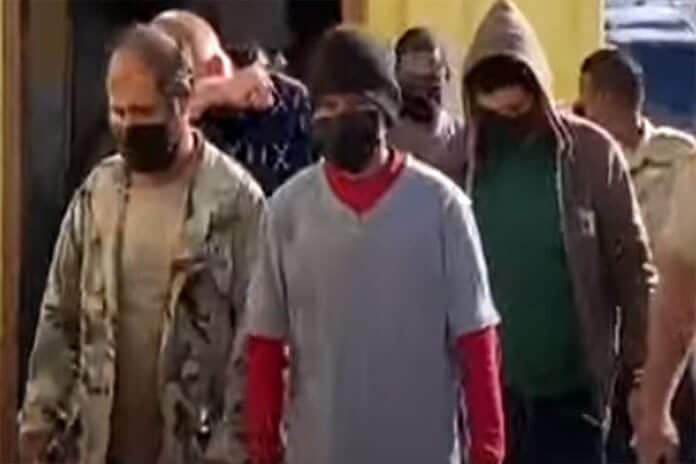 BELIZE CITY, Wed. Dec. 1, 2021 — Yesterday, six men were arraigned in the San Ignacio Magistrates Court two days after being detained following the crash landing of a drug plane early Sunday morning in the Hidden Valley area of Mountain Pine Ridge. They were all denied bail and remanded to the Belize Central Prison. Among those charged for the illegal landing of the aircraft were Salus Penner, a Mennonite farmer from Spanish Lookout, and Eric Young, a police officer confirmed today to be the head of the Victims Support Unit inside the office of the Director of Public Prosecution (DPP).

Penner and Young are being represented by attorney Richard “Dickie” Bradley, while the other four men — Miguel Angel Zetina, Edwin Armando Gonzalez, Jaime Umberto Maz, and Edilberto Medrano — are being represented by Bryan Neal. During an interview with local media following the arraignment, Neal said that his clients were arrested by police after they had gone hunting in the Mountain Pine Ridge area.

He said that no game was shot or caught that night, according to his clients, but Commissioner of Police Chester Williams believes that they were in fact “hunting cocaine” — an assertion he made repeatedly at a press conference earlier this week.

In the aftermath of the discovery of 25 ½ bales of cocaine by a team lead by ACP Alford Grinage, these men are expected to be additionally charged with facilitating the import of that cocaine into the country. The co-pilot of the plane, 27-year-old Jesus Alberto Quintero Martinez, who is from Sinaloa, Mexico, and who reportedly suffered fractures to an arm and leg during the crash-landing of the aircraft, is currently under police guard at an undisclosed healthcare facility within the country, and is expected to be charged with the importing of those drugs as soon as he is well enough to answer to those indictments.

Any efforts by the attorneys of the men who were charged to secure bail for them at the Supreme Court will be stalled, since the charges against them in connection with the bales of cocaine that were discovered will be annexed to the first charge for facilitating the illegal plane landing.

With the exception of the co-pilot who was found, all the other men detained in connection with the recent operation are Belizean.