Athletics past and present – Jeremy Sabido 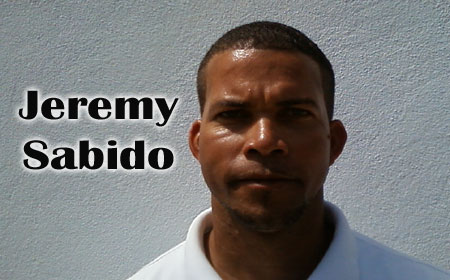 BELIZE CITY, Wed. Mar. 18, 2015–Jeremy Sabido, a runner who has a diverse athletic background. From an early age, he was a tumbler in the legendary Tumblers, and was taught by one of its founders, Ras Jen. Basketball is among other sports that he partakes in. He met Mr. Morris, a running coach, who approached him after seeing him play basketball and asked him if he ever ran in a race yet, because he looked impressive running up and down the court.

At age 15 he ran his first road race, which was a 10k on the Regent and Albert Street route, and placed 3rd in that event. Thereafter, it took him 13 years before he would run another road race. Under the teaching of Mr. Morris, in 2011 he ran a 5k and came in 3rd. Leon O Brien won that race. That same year, he ran the Marine Parade 10k against Denroy Nembhard, Darwin Rhaburn, just to name a few he recalled that were in the race. He settled for 2nd place in the race.

The year 2012, he ran his first half-marathon, which was the first Placencia Half-Marathon Race to be held. He placed 5th, and he ran that race again the following year.

His goals for running are to beat Leon O’Brien and Denroy Nembhard and to excel in the sport, to be the best. He still runs, he says, and he will start to run more when there are more races. He states that he wants more people to get into running, because it’s best to do it now when you are young, so that when you get older you will not have much medical problems. Running soothes the mind and balances the physical, mental and social. By running, you free up your mind, help youself to be positive and appreciate nature, and it’s a stress relief therapy on a whole.

Looking forward to seeing you run in the future and achieve your goals. Don’t forget, coming up in just two weeks, it’s the big Bob Lightburn Holy Saturday Half-Marathon Classic on April 4. Registration is ongoing now; text 665-4949 or facebook “bob lightburn” with your info – date of birth, name, age, gender, contact number and address, and email address, if you have. April 1st is the registration deadline.

Till next week, have a safe and healthy week.