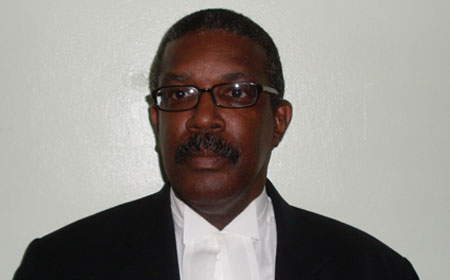 BELIZE CITY–New provisions to amend the Legal Profession Act stole the limelight from amendments to the much debated Firearms legislation at Thursday’s House Sitting, and triggered a spirited debate on the changes which the Opposition People’s United Party contends have been engineered to “break up” the Bar Association of Belize, the organization to which all lawyers must currently pay subscription fees before they can practice law in Belize.

“Speaking for myself, I do not want to belong to your Bar Association. How can that be democratic? You are coercing me. You can’t force me, man, I don’t want to be forced,” said Prime Minister Dean Barrow, in Parliament Thursday, maintaining his stance on the bill.

Barrow said that by means of the amendment, the requirement for lawyers to join the Bar and pay fees to it, will be removed, as it is not only unconstitutional but morally wrong to mandate lawyers to pay fees to the Bar Association.

As a consequence, he said, “The vast majority [of lawyers] will choose not to pay that fee.”

Opposition Leader Francis Fonseca, a practicing attorney, was the first to record his disagreement with the proposed changes, saying that the ruling United Democratic Party has tried to undermine and discredit the Bar merely because it cannot control it.

Fonseca said that it was “disheartening” to hear Prime Minister Dean Barrow and Attorney General Wilfred “Sedi” Elrington, both attorneys and members of the Bar, say that the Bar is just a bunch of PUPs, and went on to state that such a belief on their part does not provide grounds for them to attempt to resolve the matter by trying to destroy the bar, and divide the society.

The Opposition Leader asserted that the Bar plays a very important role in Belizean society and the solution to political differences is not to dismantle it.

The Bar Association has from time to time had some very questionable chapters in its long history, but it is a part of the governance structure in the country, and efforts should be made to try to fix the problems so that the Bar Association can properly and effectively serve the people of Belize, Fonseca reasoned.

Belize Rural Central area representative Dolores Balderamos-Garcia, another practicing attorney, asserted that “we should not be removing the compulsory membership in the Bar.”
Balderamos-Garcia said that the Prime Minister’s law partner, Rodwell Williams, SC, and Godfrey Smith, SC, have both presented to the Bar Association and to the country very cogent opinions that compulsory membership is not unconstitutional because of the very pivotal role that the organization plays.

“Why are we tampering with the Legal Profession Act that provides for the appointment by the Bar Association of four members to the General Legal Council, two of whom must be of 10 years standing and so have a senior status? Why would we want to interfere with that? I, therefore, submit Mr. Speaker, that this move today is not a good move. It erodes the independence of the Bar and there was and there is now no need to reconfigure the General Legal Council,” she said.

“If it isn’t broke, don’t fix it,” Balderamos-Garcia said.

“What is so sacrosanct about the Belize Bar Association? You’re saying it’s not broke, don’t fix it? It is broke and has been broke for a very long time,” Barrow said, in arguing for the amendments.

He said that the Opposition was conflating the Bar Association with the Bar, to which all attorneys by default belong, when they are two different things.

He added that Belize must be the only jurisdiction where no lawyer has ever been disbarred, and he does not even know if any has ever been punished or disciplined.

He questioned whether the General Legal Council, which is made up primarily of members of the Bar Association, but which the new amendments hope to reconstitute to include non-members of the Bar, has been truly effective in sanctioning attorneys for misconduct.

The General Legal Council is currently chaired by the Attorney General, but the amendments propose to have the Chief Justice sit as chair of the Council.

“There have been legions of complaints made by members of the public and [the Opposition] can say all they want, but with respect to John Q public, nobody cares. Nobody out there cares,” said Barrow.

He added that for those who do care, the fact is, what the Attorney General is doing is long overdue.

Barrow also took issue with the Opposition’s objection to the claim that the Bar is dominated by the PUP. He said that throughout the successive periods in which the government was headed by a PUP administration, including in 2005, when protestors were “breaking up steps of the National Assembly” and “when the whole society was being convulsed… as a consequence of PUP having entered into that illegal guarantee and wanting the National Assembly to validate it ex post facto… the Bar never one day issued one statement, never one day had word to say.”

“As soon as the government changed, every two minutes the Bar had something to say that was anti-government,” Barrow said.

“Don’t tell me any foolishness about the leadership not being ‘true blue’ PUP and not having the dignity to try and ‘cover Benjamin’ it,” he added.

As for objections to the revision of the General Legal Council, which also forms part of the proposed amendments to the Legal Profession Act debated in Parliament Thursday, Barrow said that the Bar will still have representation on the General Legal Council, but the Attorney General will now be able to put other attorneys who are not members of the Bar on the Council.

Attorney General Elrington said that he became a member of the Bar in 1977. He said that the Bar collects in excess of $30,000 a year and yet it claims it has no money to pay a secretary. He also said that frivolous complaints have been lodged against him, through the Bar.

“I am paying them to persecute me? That has got to be ridiculous!” Elrington commented.

According to Elrington, he left the Bar many years ago and has stopped attending meetings.

“When voting comes, it is right down political lines. You would think it’s another political party you are in,” Elrington commented, saying that he got nothing out of being a member of the Bar.

The position of the ruling party notwithstanding, the Opposition was firm in its stance that the amendments to the Legal Profession Act, which they believe primarily aim to dismantle the Bar Association, are “retrograde,” in the words of Opposition Leader Fonseca.

The House of Representatives, which is predominantly made up of United Democratic Party members, nonetheless passed the amendments.