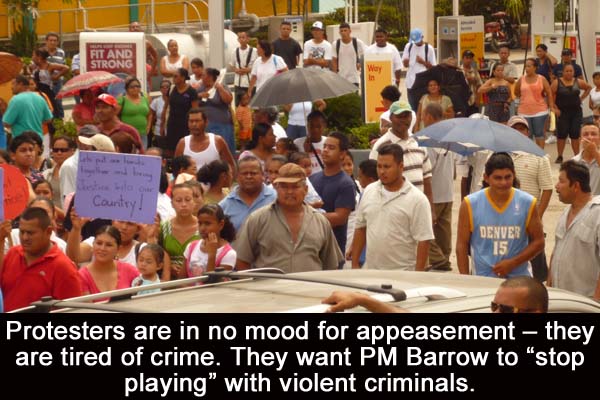 Demonstrators, tired of rape and murder, send list of demands to PM Barrow; they want DPP removed and hanging reinstated

Over 300 angry citizens converged today, Monday, at 6:00 in the morning, at the San Ignacio Magistrate’s Court to protest the rising crime rate, especially murder and rape, in the district.

The protest, which ended about 3:00 p.m., was led by the People’s Coalition of San Ignacio, which made a number of demands on Prime Minister Dean Barrow, that were delivered today to him by a 3-person committee from the coalition.

Among the demands are the removal of the Director of Public Prosecutions, Mrs. Cheryl-Lynn Branker-Vidal; the reinstatement of hanging; denial of bail for sexual offenders; denial of bail for major crimes; financing of a forensic lab; construction of a police station in Santa Elena; and the trial of Alberto Ical, 29, the main suspect in the murder of Suzenne Martinez, 21.

The committee also demanded a reply by Wednesday, October 10. Failing this, there will be a shutdown of all businesses in Santa Elena and San Ignacio, they say.

Yesterday, Sunday, the coalition held a meeting to hammer out just what their demands would be, and what would be the time limit for the issuance of a favorable reply. The unanimous resolution was taken that, if their expectations are not met, there will be a shutdown of businesses in the twin towns in protest.

Several people spoke at the demonstration, among whom were Julius Espat, PUP area representative for Cayo North, and businessman Landy Habet, a PUP supporter.

The people are enraged that no murder charges have been brought against Ical. Police had said that his footprints matched those footprints found on Martinez’ body, and more damning, demonstrators say, Martinez’ stolen cell phone was found with him.

Additionally, demonstrators say that Ical was found in the area, in his sister’s house, not far from where Suzenne Martinez lived. They know that Ical was out on a Supreme Court bail for a rape that occurred in March 2011, in the Belmopan area.

They believe that all these things constituted sufficient reason for Ical’s arrest for murder, but the DPP, Branker-Vidal disagreed, and ordered the police to only charge Ical for handling stolen goods, and to continue their investigation for more evidence.

But today, Monday, he was taken to the Belmopan Magistrate’s Court on another handling stolen goods charge, in respect of the home invasion of Robert Lewis, 53, of the Maya Mopan area, in which Lewis was slashed and stabbed to death and jewelry, among other items, were stolen from his home.

Ical was found with some of the jewelry, and he was charged with handling stolen goods. He pleaded guilty to the charge and was sentenced to one year in jail. Police, meanwhile, continue their investigation into that murder.

Demonstrators spoke out loudly about the fact that within three days after Ical was released from jail on bail, two persons have been savagely murdered.

Attorney General Wilfred “Sedi” Elrington is scheduled to meet on Wednesday at 8 a.m. with the Coalition in San Ignacio. Reports to Amandala are that PM Barrow has agreed to only some of their demands, and as a result, the business lockdown of San Ignacio and Santa Elena will be carried out on Thursday, October 11.

BELIZE CITY, Thurs. Nov. 25, 2021 -- In the wee hours of this morning, police responded to reports that an aircraft was seen flying...
Read more
Headline