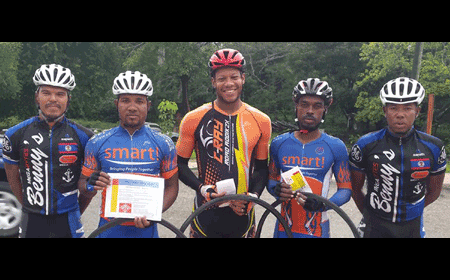 BELIZE CITY, Tues. Mar. 8, 2016–On Saturday, March 5, race number 6 of the C-Ray Saturday Races concluded the series. Initially, there were to be 10 races, but due to other races in between, we were only able to have 6 races. Although the weather wasn’t bright and sunny on Saturday morning on the Boom Road, 20 cyclists showed up (mainly those who were in contention for points) and lined up for the race.

At the sound of the whistle, the race started off rather slower than usually. The pack remained intact up until the first station prize at the Fresh Pond Village, which was a gift certificate from Da Bizz BBQ, won by junior cyclist from Cabral/Marin Cycling, Anthony Marin, who out-sprinted everyone else to the line. Several breaks were formed, but none successful.

At the second station prize at the prison, where a gift certificate for a bike cleaning from Ordonez Bike Shop was up for grabs, Brandon Cattouse decided that his bike needed that clean, and jumped out and claimed the prize. At this point, a four man break-away was formed, consisting of Byron Pope of Benny’s Megabytes, Brandon Cattouse of C-Ray, and both Mark Staine and Henry “Henno” Moreira of Smart.

At the half-way point, Hattieville round-about, the lead four were only 30 seconds ahead of the main peleton, which didn’t seem to have any interest in bringing them back. The third station prize was on the return at the prison, $25 cash, courtesy Card Heating and Cooling, which was taken by Brandon Cattouse. The lead four at this point were working together in an effort to remain out front.

At the garbage dump, the usual spot for the sprint points, this collusion among the four was compromised, as Brandon attacked to pass the line first, claiming 8 points, followed by Pope, who got 6 pts, and then Mark and Henno, who got 4 pts and 3 pts, respectively. Some 2 minutes later, the peleton was approaching the line, and the final position for the sprint pts, which was 2 pts, was claimed by junior cyclist Darien Anderson, as he out-sprinted the peleton to the line.

At the fourth station prize at the Fresh Pond Village, Brandon attacked again and claimed another $25 cash, courtesy Card Heating and Cooling. This seemed to have started something among the 4, because the Smart Team also started attacking. The first attack came from Henno; this move forced Brandon and Pope to chase, allowing Mark to sit and get a free ride. When Henno was caught, you would think being that his teammate, Mark, was there sitting, he would launch an attack. This wasn’t the reality; all 4 of them lolled. Henno circled around the 3 and launched a second attack! Pope got on the pace and brought him back. By the time this lead group was passing Gentleville, Henno was caught; and before you knew it, he launched a third attack! Pope attempted to bring Henno back and, as his luck would have it, a spoke from his rear wheel broke. The wheel started rubbing on the brakes, visibly slowing him down. Brandon was forced to take up the pace, as Henno was out front making a solo run for the line. Mark sat comfortably on Brandon’s wheel, while Brandon kept Henno at a distance close enough, where he could “sling shot” across to him close enough to the line. 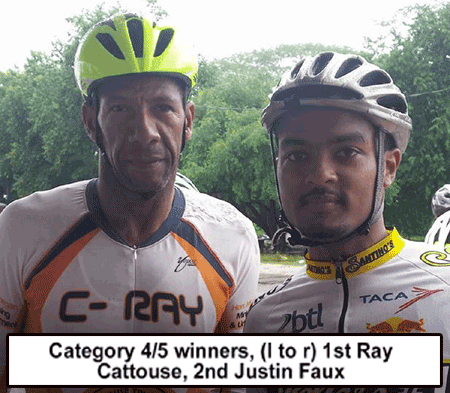 At the line, we saw the lone figure of Henry “Henno” Moreira coming in the distance, then behind him, Brandon Cattouse and Mark Staine, and behind them, Byron Pope. A couple hundred yards away from the line, Brandon Cattouse made his move to get across to Henno and pass him before the line. With quick acceleration and proper timing, Brandon did just that, winning the race in a time of 58 minutes 27 seconds, averaging 24 mph over a distance of 24 miles. 2nd place went to Mark Staine, who, for the life of him, couldn’t get around the quickness of Brandon. 3rd place went to Henry Moreira, and 4th was Byron Pope, who had unfortunate mechanical problems.

This series was held in an effort to better prepare our cyclists for their respective Cross Country: Female – 13th March, Junior – 20th March, and Elite – 26th March (Holy Saturday). After all three races, we will analyze them and see if the cyclists who participated in the C-Ray Series placed or were factors in the Cross Country.