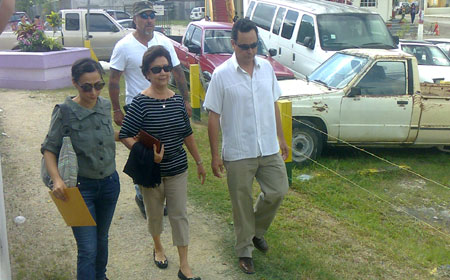 ORANGE WALK–The Cervantes family of Orange Walk Town, who have been on an emotional rollercoaster since the death of their patriarch, Ramon “Don Ramon” Cervantes, Sr., in early July, today went to the Orange Walk Police Station to turn in what they consider information that is critical to solving the puzzle about the events that led to Cervantes, Sr.’s brutal death.

Inside a manila envelope which was clutched in the palms of Marissa Cervantes, the victim’s daughter, was a sensational telephone recording, which contained allegations that a powerful sitting politician and a senior police officer, and other police officers, were involved in Cervantes’ murder.

The recording, which was played at a memorial for Cervantes and which featured a 15-minute conversation between the accused ringleader of the group which murdered Cervantes, Manuel “El Pelon” Castillo, and Cervantes’ widow, Vilma Cervantes, gives a chilling account of the murder conspiracy, in which a Mexican criminal gang was mentioned as being in cahoots with the accused politician and local police officers.

Castillo, from his place of hiding, presumably outside the country, did not present any proof, however, of his very serious allegations.

Two hours after they had individually presented their statements concerning the recording to authorities, the family of Cervantes emerged and told us about their expectations after providing police with what could possibly become a key piece of evidence in the high-profile case.

“The conversation was handed in. The ringleader of the ring that killed my dad mentioned a full name, and we hope that the police carry out their investigation, as they would do with any other ordinary citizen that is accused or mentioned in a crime”, said Ramon “Monchie” Cervantes, Jr., the son of Cervantes, Sr.

Cervantes, Jr., the PUP standard-bearer for the Orange Walk North constituency, who was supposedly the target of the murder plot, stressed that in the interest of justice, the people whose names were called during the recording should be investigated and interrogated by the investigators who are attached to the case.

One of those people is Deputy Prime Minister, Hon. Gaspar Vega, Cervantes’ political opponent, who aired an emphatic denial of the accusations against him yesterday evening, Thursday, through the television media.

“I was not, and could not, have been involved in any way with Mr. Cervantes’ death. All who know me know that I would be utterly incapable of such a horrible act. It hurts and angers me that such a recording from the person the police have stated to be the principal murderer, and who ran away to avoid justice, should be used now to endanger me and my family.

“I cannot understand how anyone could want to place any reliance on what this Castillo supposedly says. His co-accused have confessed and detailed exactly how Castillo masterminded this, and another murder. This has been confirmed by the evidence the police gathered. The fact is that as the murder mastermind, Castillo can have no credibility. This is also underlined by the huge holes and obvious lies in the story he tells on the recording.

“At the end of it all, therefore, I have to feel that politics is involved here. It is a terrifying thought, but the facts are clear, and I condemn what is being done,” said Hon. Vega.
“Monchie” Cervantes insisted that there were no political games behind the release of the recording.

He said, “What seems to be political are the events that have been unfolding over time and the facts that have been coming to light. They seem to be pointing in the direction that my father’s murder was political. As for him saying that the revelation of the tape is political, Manuel Castillo called and from the start of the investigation, I have told all the media that as events unfold, we will be keeping the public informed about those events, and this is one such occasion.”

We understand that as a result of the recent events, DPM Vega has been given additional security protection.

In defense of the Hon. Vega, yesterday, Thursday, after the recording surfaced, the Police Press Office issued a release saying that as far as police are concerned, their investigations have proven that no one other than Manuel Castillo and his accomplices – three of whom are currently behind bars pending trial – are responsible for the kidnapping/murder of Ramon Cervantes, Sr.

Cervantes, Jr., commented, however, “It cannot be closed, and the police cannot say they are sure … as long as there is no closure, the investigation will go on … I think this is a good opportunity for us to demand transparency, and good police work, so that, frankly, the institution could gain back their credibility.”

“When they said they would close the case, we were very dismayed. I think the police either were forced into it, or they didn’t realize that it has done them more damage, more damage to their credibility … what are the reasons to close it early, right after a press conference and a revealing tape?” Cervantes, Jr., asked.

Other townspeople, as well as the family, insisted that the caller at the other end of the line on October 8 was indeed wanted fugitive Manuel Castillo, who is believed to have fled to Mexico.

The Officer in Charge of the Orange Walk Police Formation, ASP Dennis Arnold, did not entertain requests for comment by the media on the handing in of the recording, nor on the statement which was issued by the Police Press Office, saying that with the exception of Castillo, who is on the run, they have all the participants in the crime on lockdown.

The Cervantes family has said that while Belize police have released the information about the reputed ringleader, Manuel “El Pelon” Castillo, to InterPol, which has listed Castillo as a wanted man, they have not asked their Mexican counterparts for help in apprehending him.