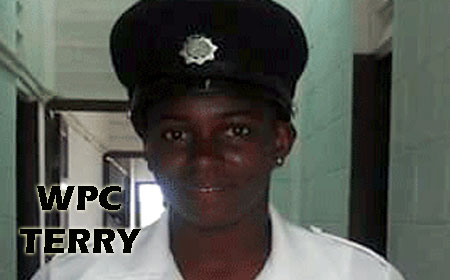 BELIZE CITY, Mon. Oct. 5, 2015–Woman Police Officer Shanique Roca Terry, who graduated as Champion Recruit in Police Recruit Squad 89 and was presented with a Baton of Honor during graduation ceremonies in October 2013, died of complications at the Karl Heusner Memorial Hospital at about 4:00 Saturday morning, and her angry family members are claiming that her death is the result of negligence on the part of the hospital.

Prior to her death, WPC Terry had written on Facebook that since the birth of her son, who was born on June 24, she had been in and out of the Karl Heusner Memorial Hospital (KHMH), in Belize City, and Northern Regional Hospital in Orange Walk.

Terry reported that she had been diagnosed with a variety of illnesses – pulmonary edema, cardiomyopathy, vein thrombosis, enlarged liver and pulmonary and thromboembolism. She had reportedly been suffering from an enlarged heart which led to her liver working overtime, and in the process, she had developed blood clots in her lungs and in two major veins.

She had initially been admitted to the Northern Regional Hospital, and was then taken to the KHMH for further treatment.

According to Monica Usher, Terry’s best friend and confidante, intravenous tubes in Terry’s arms were mishandled, and this resulted in the swelling of her arms and the development of clots. She was brought down to the KHMH, where she was treated for the clots and the swollen arm, and was admitted into the hospital for 9 days, after which she was returned to Northern Regional, after which she went home.

However, on her arrival home, she again began to get ill with complications, and began to spit blood. She was again taken to the Northern Regional Hospital, and then re-transferred to the KHMH. Usher said that on Terry’s arrival, she was put in a room with a pan to spit blood, and she was not seen for about 2 hours.

Doctors then attended to her and, according to her family, it was reported that Terry had blood clots in 3 places. She was then examined and X-rayed, and afterwards she was told that she would be admitted for a month.

She was then given medication for the clots. However, after two days, on Friday, she was told that she was doing well and would be discharged; she was then taken back for observation and eventually discharged to go home.

The family who saw her condition, however, was adamant that she should not be discharged. Her friend and confidant, Usher, who saw her on Friday, said that she would take her to Medical Associates on Saturday after she was discharged to go to Orange Walk, but it was not to be. At about 4:00 Saturday morning, Terry died in her bed at the KHMH.

Monica Usher told us that Terry communicated with her and said that she was unhappy with the treatment she was receiving.

Through Facebook, Terry was seeking funds to go abroad for treatment for her condition; she was seeking US$3,500, of which she had raised $125.

Terry had written that although she was a 24-year-old mother of a baby boy 3 months old, she hardly saw her baby because she was always hospitalized. She wrote that there are some good doctors and nurses working in the hospitals, but she lost all faith in the institutions, because she had been over-prescribed with medication which led her back to the same hospital. She wanted to get another evaluation at a hospital in neighboring Mexico.

Shanique Roca Terry was a member of the Belize Police Department for the past 2 years. Recruit Intake Number 89, comprised of 80 men and 37 women, amounting to a total of 127 police officers, was one of the largest police recruit intakes in the history of the Police Department.

In her graduation speech at the Police Training Academy in Belmopan, WPC Terry had said that they, all 127 of them, stood strong and proud as full-fledged police officers. They perhaps took different avenues and faced different circumstances to arrive at that point, she said, but the “hows and whys” were no longer important because they were now fully trained police officers.

Monica Usher, her friend, said that enough acknowledgement was not given by police to the accomplishments of the young police woman. After she graduated with honors, as Best Recruit, Terry was sent to Precinct 1 to conduct foot patrols in the rough Belize City Southside, and was not given the privilege of being employed in an office.

Terry’s sister told Amandala that three days after she began to work on the streets she was fired at and there was a shootout, but she escaped unhurt.

WPC Terry is scheduled to be buried in Willows Bank in the Belize District on Sunday, October 11, with full honors.

She is survived by her son, 3 months old; 5 brothers – Lawrence, well known as “Jungle,” David, Steven, Deshawn and Jason; 6 sisters – Victoria, Tracey, Delita, Telecia, Sharrett and Joy. She is also survived by her mother, Delcie Roca, and her common-law husband.

Monica Usher wrote on her Facebook page that Terry knew in her heart, before she took her final breath, that she was loved by so many.

She wrote: “I love you, Shanique Roca Terry, my little sister that God sent with everything to me. I LOVE YOU, Shan.”