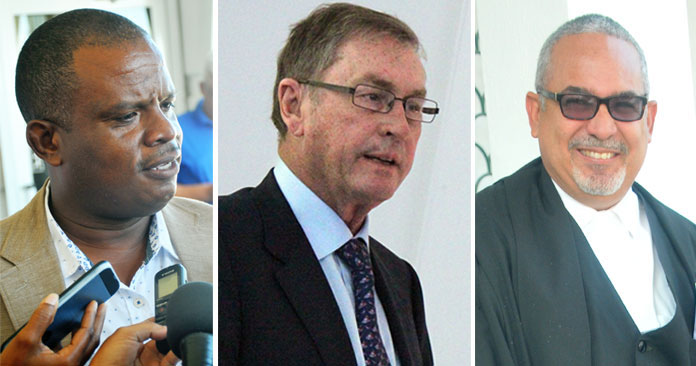 The Belize Peace Movement, the Belize Progressive Party and Vision Inspired by the People filed a lawsuit in the Supreme Court to force the Elections and Boundaries Commission to address the disparities in the constituencies, according to the Constitution.

This afternoon, Chief Justice Benjamin ruled that Ashcroft met the court’s requirement to join the redistricting case because he is a citizen of Belize and he intends to vote in this year’s general elections, and also, that he has substantial business interests in the country.
The court ruled that Ashcroft would be allowed to make submissions and call expert witnesses in the claim, which now goes into case management and disclosure of affidavits when the parties return to court on March 6.

Marshalleck said, “This type of claim is not new or unique to Belize. It’s happened elsewhere; in fact, it is ongoing in other parts of the world and there have been particular ways of dealing with it.

“One, the expert studies the distribution just as the Elections and Boundaries Commission should and determines whether or not the districts, as drawn, meet the constitutional requirements. Once that analysis is done, then the next step is what needs to be done in order to bring it into compliance.

“And normally, there is a range of possibilities, so it is about presenting all of that so that everybody fully appreciates just how mal-apportioned the divisions are, and just what steps can be taken to correct it.”

Marshalleck was asked if it is a situation where Parliament increases in size by the adding of more representatives to represent the population.

“No, the Constitution fixes the number of constituencies. It is fixed at thirty-one and it can’t go below twenty-eight without a Constitutional amendment. The redistricting is about making sure the divisions are drawn within those parameters to ensure that the effect of each vote is, nearly as possible, equal,” Marshalleck replied.

The attorney for the primary claimants, Arthur Saldivar, also spoke to reporters. Saldivar is of the view that joining Ashcroft to the case can assist the case.

“The affidavit that he has put forward intimates certain things, that I believe is to the benefit of the case. And should we have those experts come in, I think, it is always good to have knowledgeable people on the issue giving the benefit of their expertise to the court,” he said.

Saldivar was asked, as a former politician, to shed some light on the issue of redistricting in light of the fact that we have conducted this exercise a few times before and did not rely on expert witnesses or expert testimony. “Why is that necessary this time around,” he was asked.

Saldivar said, “What we did before was not comprehensive in keeping with what the Constitution requires.”

He further stated, “What was done is that there was gerrymandering of political borders to facilitate certain individuals who wanted to run in politics.

“In this particular instance, you are not looking to serve an individual or individuals; you are looking to address the needs and interest of the people of Belize as a whole to ensure that democracy is given a chance to at least operate the way it should.

“Insofar as it relates to finances in politics, as we know, my namesake was on Love FM this morning—incriminating himself, I might add—and he was saying that he was doing this because of this large constituency that he is responsible for, of over eight thousand people.

“Now, it is sad that he would try to make all of Belmopan his accomplice in what he has done. But the truth of the matter is that when we redistrict and bring the constituencies within constitutional parameters, we mitigate the need for large finances in addressing the issues of the people because we give them more representation, instead of less.”

BELIZE CITY, Mon. Aug. 10, 2020-- The Office of the Director of Health Services has announced that a total of 153 positive COVID-19 cases...
Read more
Highlights

BELIZE CITY, Mon. Aug. 10, 2020-- Despite the fact that members of the public are urged to do all they can to combat the...
Read more
- Advertisment -