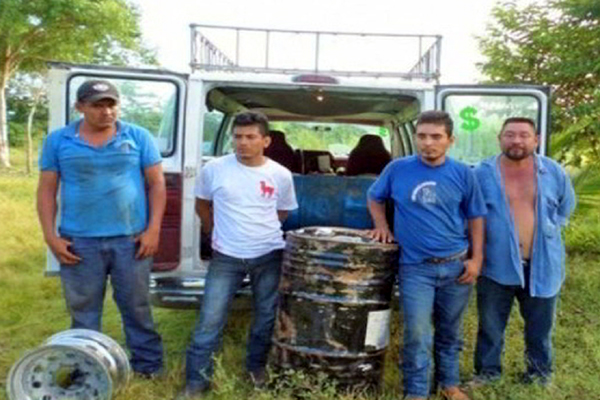 The precursors are believed to have originated in Belize

Mexican authorities have reportedly seized a significant amount of precursor material which is used in the production of methamphetamine, popularly known as “crystal meth”, and which is believed to have originated from Belize.

According to Mexican media reports, 1,400 liters (or about 105 gallons) of chemical precursors were confiscated by the Mexican army in an area between Quintana Roo and Campeche in proximity of the Belize-Guatemala border yesterday, Thursday, July 24.

The precursor material was reportedly found in seven drums, and was being transported in a Ram 350 van bearing Quintana Roo license plates.

Four persons, all of Mexican nationality, were subsequently detained in connection with the discovery. They have been identified as José Alberto Ávila Reyes, 28; Ricardo Hernández Reyes, 48; and Francisco Gómez Chanelo, all of José María Morelos town in the state of Quintana Roo, as well as Crisanto Zapata, 33, of the Pioneros del Río community.

At the time of the bust, the precursor was reportedly being taken to a lab in Pioneros del Río, which is located close to the border area, where it is suspected that it was to be used for the manufacture of the deadly “crystal meth” drug.