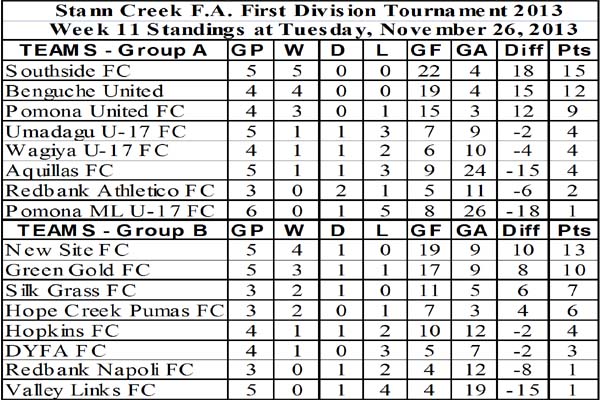 All back matches for the SCFA Old Master & Pal’s Guest House Cup are being played on Tuesdays and Thursdays.

Back matches for tomorrow:

The Southern Secondary Schools Sports Association (SSSSA) Regional Basketball Tournament will be held this Saturday, November 30, at the Punta Gorda Sports Complex in Punta Gorda Town. The tournament will be hosted by Julian Cho Technical High School and will feature one female and one male team representing each of the three zones.

For this school year 2013-2014, Bowen and Bowen Crystal Brand will provide juice and water for participating teams.

Week 2 in the FFB Inter-District Tournament will continue at the Carl Ramos Stadium this Saturday night, November 30, at 7:30 p.m. with Green Gold vs Hope Creek Pumas. Admission is $5.00. It is Green Gold’s home game.

Phillip Marin of Dangriga has been selected by the Football Federation of Belize, with the collaboration of the Belize Olympic Committee, to attend the Pan American Sports Organization (PASO) Continental High Level Technical Course in Women’s Soccer for coaches, which will be held from December 1 – 7 in Mexico City.

This training is being done by the International Coaches Enrichment Certification Program (ICECP). The objective of the ICECP program is to provide national level coaches with a sport sciences coaching education program orientated at developing proficiency in the technical, theoretical, conceptual, managerial and ethical aspects of coaching at all levels of competition.