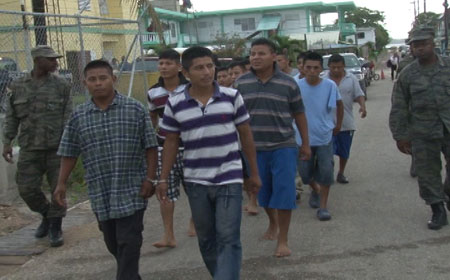 PUNTA GORDA TOWN, Thurs. June 25, 2015–The mood was tense outside the Punta Gorda Magistrate’s Court yesterday, Wednesday, as eleven residents of Santa Cruz Village, Toledo, along with the mouthpiece of the Maya Leaders Alliance (MLA) and the Toledo Alcaldes Association (TAA), Cristina Coc, were formally arraigned for what authorities have termed as the unlawful assault and detention of Rupert Myles, 37, a Creole man who was almost evicted from the said village for allegedly violating the community’s regulations regarding the occupation of their communal lands.

Today, Thursday, the 1st (head) alcalde, Manuel Pop, handed himself in to police and has been detained pending charges.

The villagers were rounded up during a pre-dawn raid that took place at around 4:00 a.m. yesterday when four truckloads of police officers descended upon the village, literally dragged the ones they wanted out of their beds, refused to let them dress properly, and whisked them off to the Punta Gorda Police Station, some without shoes and shirts, where they were collectively charged based on a police report that was lodged by Myles in the wake of the incident, which has attracted national attention due to the circumstances surrounding his detention.

Shortly after 3:00 p.m. yesterday, Aram Canti, 33, the village chairman; Renato Canti, 34, the 2nd Alcalde; Isabel Canti, 28; Michael Sho, 24; Alfredo Mes, 30; Timoteo Sho, 20; Pedro Teul, 26; Basilio Teul, 43; Oliegarlo Sho, 23; Raymundo Sho, 44; and Armando Mas, 24, all of whom are farmers from Santa Cruz, were escorted to court amid heavy police presence along with well-known Mayan activist, Cristina Coc, 34, who was also arrested – albeit for a separate offence related to the said incident – when she went to check on the villagers at the police station some time after their arrests. 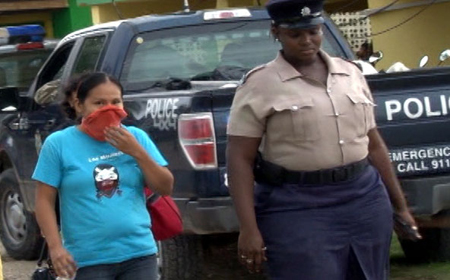 They all appeared before Magistrate Emerson Banner. Coc, who was represented by her sister, attorney Monica Coc-Magnusson, had been charged for conspiracy to commit unlawful imprisonment, while the other detainees had to answer to charges of unlawful imprisonment, as well as common and aggravated assault of Myles during a citizen’s arrest that took place in Santa Cruz last Saturday, June 20.

Since the matter is indictable, no plea was taken from the defendants and their case was adjourned until July 28, 2015.

Bail was initially set at $8,000 plus one surety of the same amount, but attorney Audrey Matura-Shepherd, who represented the villagers, requested that the amount requested for bail be reconsidered, since land documents would have been required as bond and the villagers would not have been able to obtain land titles because they live on communal lands.

During the pre-dawn sweep of the village, we understand that the group of eleven were hauled out of their beds after personnel from the Police’s Special Patrol Unit allegedly kicked down their doors and forced them out of their homes before they were able to properly attire themselves. 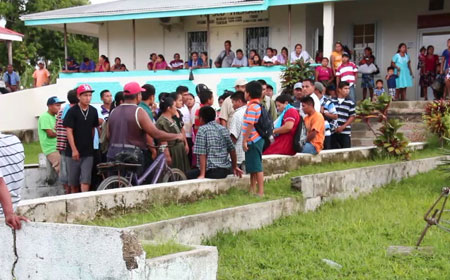 Matura-Shepherd emphasized that her clients were not given a warrant for their arrests and submitted to the court that two of her clients were allegedly abused while in police custody, including Timoteo Sho, who was allegedly punched in the neck, and another, Alfredo Mas, who was reportedly stomped on the leg.

Due to the fact that at least four of the men were not properly dressed, the group was not allowed to go before the magistrate, which delayed the arraignment until they were able to borrow shirts from others from a gathering of approximately 100 Mayan villagers from Santa Cruz and surrounding areas who had flocked the court in support of the accused.

The complainant, Rupert Myles, a black Belizean who has a child with Maria Cal, a Mayan woman of Santa Cruz, was allegedly subdued, handcuffed, and tied with a rope just outside his home near the Uxbenka Archaeological Site, after which two villagers, armed with machetes, were put to guard him. Under guard, Myles was allegedly mobbed by a group of other villagers who reportedly claimed that they don’t want him living in the village.

After his release, Myles stated that they unlawfully detained him and tried to kick him out of the village because of the color of his skin, but the Mayans claimed that he destroyed a portion of the Uxbenka site when he recently built his house on village lands without the proper permission from the village authorities, which, in this case, would be the village alcaldes.

There have been widespread allegations of racism on the part of the Mayan villagers since the story surfaced, and on Monday, Prime Minister Dean Barrow, in an interview with the media, condemned their actions – which were allegedly at the behest of head alcalde, Manuel Pop, and encouraged by Cristina Coc – describing it as “outrageous and indefensible”, and even announced that he would look into the matter carefully to see if any of the villagers would be criminally liable.

PM Barrow’s stand against the Mayans, who recently won a court battle against the Government of Belize, was in stark contrast to his actions after his former Immigration Minister, Elvin Penner, allegedly acted criminally in what became known as the “Penner Passport Scandal,” which was revealed on September 19, 2013, when he was fired from the Barrow Cabinet.

Even though the law is clear with regards to Penner’s alleged transgressions, Barrow stubbornly refused to admit that Penner’s actions were unlawful. The Police Department refused to investigate and charge Penner. This was in line with Barrow’s public pronouncement that no criminal action against Penner would succeed. Penner’s only punishment was to be stripped of his Cabinet portfolio by Barrow, which Barrow later proclaimed was enough punishment.

This time, however, the Prime Minister was very vocal against the Maya of Santa Cruz, even though the police had not yet completed their investigation of the incident.

Today, Amandala spoke with Officer Commanding Punta Gorda Police, Superintendent Simeon Alvarez, who ordered the operation – which, he said yesterday, was based on instructions “from higher up” – after receiving Myles’ report, and he told us that while he cannot say why four of the detainees were not allowed to put on proper attire at the time of their arrest, he noted that the operation was headed by Deputy Officer Commanding Punta Gorda Police, Inspector Ernel Dominguez.

We have so far been unable to talk with Dominguez to get his comment on that issue.

Alvarez also mentioned that Pop was not charged along with the others because he could not be located at the time of the raid, but he handed himself in to police today.