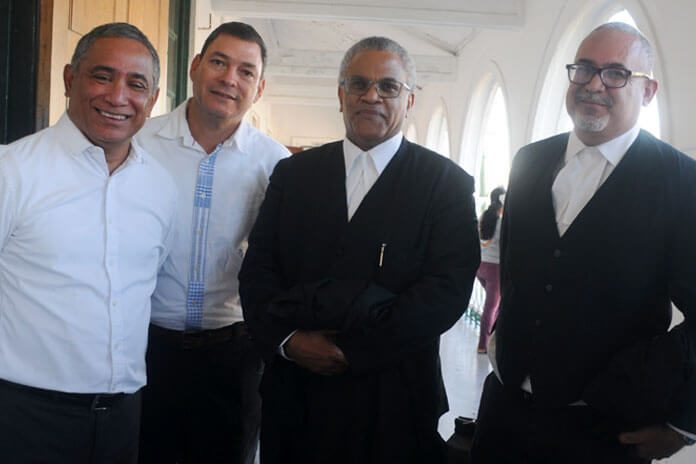 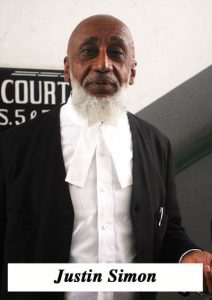 The PUP leaders’ lawsuit is contending that the United Democratic Party government of Prime Minister Dean Barrow has spent $1.3 billion in violation of the Finance and Audit Reform Act and in violation of the Constitution of Belize. The claimants are therefore seeking a number of reliefs from the Supreme Court to restrain the Minister of Finance and the Financial Secretary from spending any more money out of the Consolidated Revenue Fund without the proper authorization from parliament.

Three witnesses took the witness stand yesterday afternoon, when the case began in the Supreme Court of Chief Justice, Hon. Kenneth Benjamin. Hon. Julius Espat was the first witness to testify, and he was followed by Opposition leader Briceño. Financial Secretary Joseph Waight was the third and final witness to take the stand.

The hearing resumed this morning with both claimants and the defendants’ attorneys making oral submissions.

The claimants are being represented by attorneys Eamon Courtenay, S.C., and Andrew Marshalleck, S.C., while the Prime Minister and Financial Secretary are being represented by Justin Simon, Q.C. Simon, who was called to the Belize Bar yesterday morning, is being assisted by Assistant Solicitor General Samantha Matute Tucker and Crown Counsels Brianna Williams and Agassi Finnegan.

In his submission, Marshalleck pointed out that none of the 21 warrants that were used to access moneys from the Consolidated Fund were presented to the court.

Court records will show that there was a pending legal challenge to the spending of the Petrocaribe monies, which were kept in a separate fund which formed a part of the Consolidated Revenue Fund.

Marshalleck submitted that while legislation can validate an illegal act, it cannot validate an unconstitutional act.

Simon submitted that the claimants are staking their claim on four main issues and in so doing are basing their case on the Constitution in addition to the Finance and Audit Reform Act, which was passed in 2005.

Simon further submitted that any law may make provision for withdrawal from the Consolidated Revenue Fund for meeting expenditure necessary to carry out the services of the government, and this can be done up to four months into the fiscal year. He said that there was an increasing acceptance that the only wrong that was committed was procedural.

“To what extent the court can make past action null and void?” Simon asked in his submission. “The supplementary appropriation bill has been spent,” he submitted. “The constituencies of the claimants have benefitted and there has been no misappropriation of the funds,” he went on to say.

Yesterday, Financial Secretary Joseph Waight was cross-examined by Courtenay.
Courtenay asked if there was any supplementary appropriation bill in 2012-2013, and Waight replied that there was none.

Courtenay asked Waight to explain the Petrocaribe arrangement with the Caribbean countries and Belize.

Waight explained that the Petrocaribe program was arranged by the Bolivarian Republic of Venezuela to alleviate the high cost of fuel and to assist these countries, including Belize, in their development.

Waight went on to explain that the participating countries would pay 40, 50 or 60 percent of the cost of the fuel products and the balance would be treated as a loan from Venezuela. In the case of Belize, the fuels were then sold at 100 percent market value.

Another company which was owned fully by the Government of Belize was Petroleum Energy Limited.

Another company, Trafigura, was also involved in the purchase of fuel products from Venezuela.

Under cross-examination from Courtenay, Waight admitted that Trafigura is the parent company of Puma, which buys the fuel from Venezuela and pays for it in US dollars, 40 to 60 percent of which is deposited in an account at the Central Bank of Belize.

Waight also said under cross-examination that Belize Petroleum Limited, a government of Belize-owned company, was also involved in the purchasing of fuel products from Venezuela and received monies from Apbel.

Under cross-examination Waight admitted that the money in the Apbel account was public funds and he would prepare the paperwork when the Minister of Finance wanted to know how much money was in the account.

Courtenay asked Waight, “…. these Supplementary 15 Appropriation Bills that were being…well, the expenditure covered by these Supplementary Appropriation Bills, did you specifically bring to the attention of the Minister of Finance, that the expenditure was unauthorized by the National Assembly? And I am speaking specifically of those that are being done retroactively?”

Waight replied, “Well, by definition of Supplementary, it means after the fact.”

“So my question to you is, in relation to the retroactive, I want to know, the Minister of Finance, according to you, issuing these special warrants authorizing the expenditure, and you are aware that there is no Parliamentary approval. I want to know whether you informed the Minister of Finance that we are spending money without legislative approval?” Courtenay asked.

Waight replied, “I would tell the Minister of Finance that there is no money in the budget; therefore, we have to go for supplementary, yes, so there was no authorization.”

On the matter of the spending of Petrocaribe funds, Waight said in his sworn affidavit that it was impractical for government to go to the National Assembly after every Petrocaribe shipment.

Waight said that he got his instructions from the Minister of Finance (Barrow) and that he was aware that there was no approval from parliament for the special warrants. Courtenay asked Waight if that concerned him, and Waight replied that it did.

Waight was not able to specifically state the unforeseen expenditures which made it necessary for him to withdraw 205 million dollars without going to parliament.

Waight replied, however, that the money was to pay compensation. Waight said he told PM Barrow that he had to go to parliament for approval. The Belize Constitution speaks to the need to create a contingency fund, but under cross-examination, Waight admitted that government did not set up a contingency fund.

He said there was a 100-million-dollar special order that had “slipped” him, and said that he intends to bring that to parliament before the end of the fiscal year. (Government’s fiscal year ends March 31.)

Waight told the court that PM Barrow did not comply with the law which gives a 3-month period to take a supplementary allocation to the House of Representatives for approval.

Following the hearing yesterday evening, Opposition Leader Briceño remarked to reporters that he was shocked and dismayed to see how PM Barrow has abused the Constitution and the laws of the country when it came to the spending of the people’s money.

“It reminds me that coming to 2008, when he was in Opposition, he [Barrow] criticized our government heavily for spending, then coming to get approval in the National Assembly, and now here he comes, doing that, and even worse,” Briceño said.

Lead attorney for the claimants, Eamon Courtenay, said: “This claim brought by the two leaders has to do with the public’s money. It has to do with whether or not a government can take 1.3 billion dollars, spend it on how it wishes, without any accountability to parliament. The Financial Secretary was very clear in his answers. He said that the money that was spent, was spent because there was an urgent and unforeseen need.

“I brought to his attention that it is hundreds of millions of dollars. He stuck to his line, but I think anybody will know that you cannot spend 1.3 billion dollars as urgent and unforeseen. He accepted that in fact, this was done by special warrants issued by the Prime Minister. He accepted that the Prime Minister was aware when he was issuing those warrants, that the money had not been approved by the National Assembly, and that he advised and informed the Prime Minister that the money was not there; it had not been approved by the National Assembly.”

“Nevertheless, they proceeded. So, they proceeded, knowing full well that they did not have legislative approval, and the Finance and Audit Reform Act sets a limit, which cannot be exceeded. And he told the court, that they exceeded that limit on a regular basis, and they did so knowingly,” Courtenay said.

The PAC chairman, Julius Espat, was asked what he thought of the Financial Secretary’s assertion that the 100 million dollars had slipped him.

Hon. Espat remarked, “I don’t know how you could use the word, ‘slip’. This is a professional that you’re dealing with. His testimony said that he is the Financial Secretary for over 12 years, if I’m not mistaken. The Prime Minister is one of the leading attorneys in the country before he became Prime Minister. There is no way that they slipped.

“When the question was asked of the Auditor General’s report, 2012/2013 — close to 100 million dollars for that year alone — was there a special warrant issued? No. Did it get approval from the House? No. Did they even try retrospectively, after 12 years, to seek approval? No. And then, that’s only 2012/2013.”

Chief Justice Benjamin has indicated that he will issue a ruling on January 21, 2020.