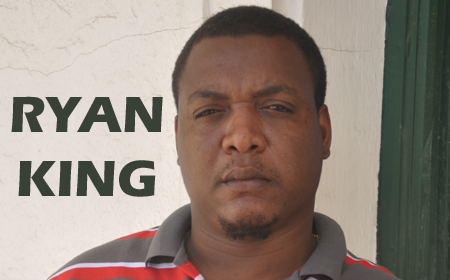 BELIZE CITY, Tues. Jan. 27, 2015–A man who discovered that his common-law wife was having an affair with her ex-boyfriend and allegedly decided to burn his bedding in her living room, because he “did not want others sleeping on the bed” he had bought with his money, was cleared of the two indictments for arson after a jury deliberated for over four hours today, in the Supreme Court of Justice Adolph Lucas.

As he stood in the prisoner’s dock, Ryan King, 36, looked relieved after Justice Lucas addressed him: “The jury has found you not guilty. They have arrived at a proper verdict. You are free to go. Go and sin no more.”

In the short trial, King’s attorney, Arthur Saldivar, made a no-case-to-answer submission on Friday, but Justice Lucas ruled against it, so he had to come up with a defense.

King gave an unsworn dock statement explaining that he and the virtual complainant, Kendra Pennil, had an argument over her cheating on him.

“Her ex-boyfriend texted me and told me that she was doing it with him—they were involved with each other,” King told the court, adding, “we both decided that I would take time, off. So I called her and told her that I was coming for my things.”

King explained that when he reached her house in Mahogany Heights, his things were not outside. “I had told her to put them outside,” he said.

“When I went inside, I asked her for the rest of my stuff, and we exchanged words. She grabbed the stuff and threw them in my face, the sponge and pillow. That is when I decided to set fire to my mattress, sponge and pillow,” King continued.

“I told her, no next person would sleep on that, because I bought them with my money. There was no intention of hurting her. Even though we went through all that, we were still sleeping with each other,” King said, ending his brief dock statement.

In his summary of the evidence presented, Lucas reminded the jury that Pennil had testified that no part of the house was damaged by the fire, which she had put out with the assistance of neighbors and two women who had gone to her home to style her hair.

While the women poured water on the burning mattress — about 20 buckets were used, Pennil testified — King stood on the verandah. The evidence also bore out the fact that at no time did King attempt to stop Pennil and her neighbors from putting out the fire.

Lucas also reminded the jury that King merely took away the bucket of water that Pennil had poured in the bathroom to put out the fire, but, noted Lucas, “he did not prevent her from leaving the house.”

“The accused merely wanted to destroy the items in the presence of Ms. Pennil,” Lucas told the jury, “If the accused wanted to endanger Ms. Pennil, why give her notice that he is going there?”

Saldivar in his address to the jury said, “The accused did not set fire to Pennil’s house. He set fire to his own mattress, sponge and pillow. His whole purpose was to destroy the mattress so that her ex doesn’t sleep on it.”

Saldivar urged the jury to consider that if Pennil had been asleep and the accused went and set fire to the mattress, then he would have been endangering her life.

The Crown’s case was presented by Crown Counsel Shanice Lovell, who attempted to convince the jury that King had indeed targeted Pennil and that he had committed the offense of arson when he set fire to his belongings inside Pennil’s house.