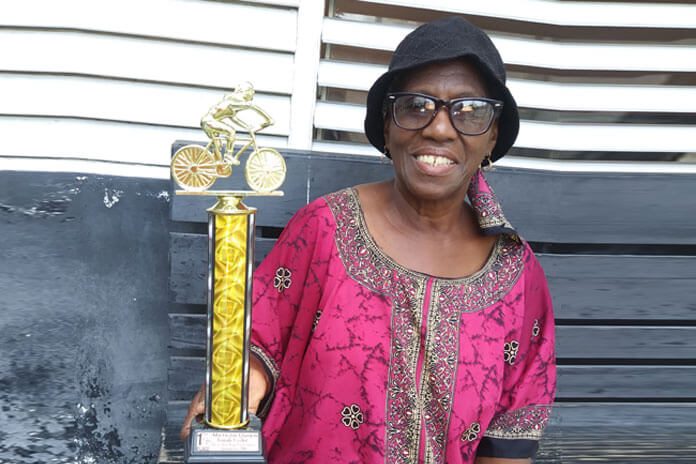 BELIZE CITY, Mon. Dec. 30, 2019– Jacklyn Usher, a cycling enthusiast of Belize City, presented a trophy for the KREM New Year’s Day Cycling Classic 2020 at the Kremandala compound on Partridge Street today, at about 1:30 this afternoon. Usher said that the trophy will be presented to the first Belizean female rider that crosses the finish line in the upcoming Krem Cycling Classic that will be held this Wednesday, January 1, 2020.

Usher said the trophy is called the Mathilda Usher Scott and Family Trophy. She said that she, her mother Mathilda, and family, have always been cycling enthusiasts, and they were at every race that was held in the city. She said it was her honor to make the donation in memory of her mother, who died five years ago.

Usher said that she wants females to take part and excel in the sport of cycling. She also thanked KREM for the great effort they make to carry out the New Year’s Classic.

The KREM New Year’s Day Cycling Classic is a single day road cycling race that is considered the second most prestigious race in Belize, after the Holy Saturday Cross Country Cycling Classic.

The race starts at the Northern Border, at Santa Elena in the Corozal District, and finishes at the corner of Central American Boulevard and Mahogany Street in Belize City.