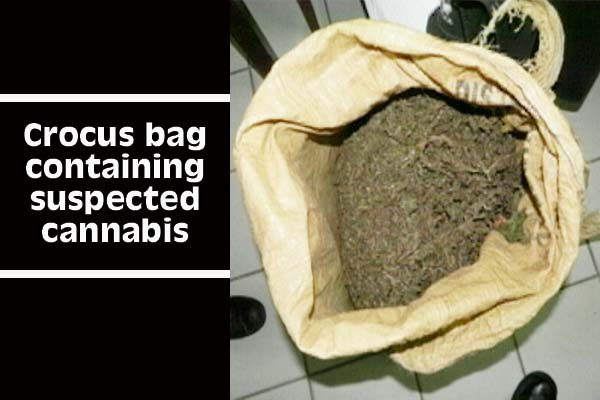 Sometime after 10:00 yesterday morning, Santa Elena police who were conducting routine patrols near a football field on Bradley Street in Santa Elena Town spotted a young man who ran off, leaving a crocus bag which was later found to contain a whopping 18 pounds of suspected cannabis.

The officers reportedly searched the immediate area and found the 16-year-old minor hiding inside the sports complex. He was detained and subsequently hauled off to the police station, where the bag – which is believed to be the property of a known drug peddler from the area – was weighed.

He explained that two officers attached to the Tourism Policing Unit were on patrol near a football field in Santa Elena when their attention was drawn to a young man who was sitting beside a brown crocus bag inside the stadium.

Upon seeing the police, the young man reportedly took off and left the sack, which was later checked and found to contain a green leafy substance suspected to be cannabis.

After a search of the immediate area, the young man was found hiding in some bushes about 200 feet from where the sack was located, and was escorted back to where the sack was, and then taken to the police station.

There, police found out that he was a minor, and thus, his mother was contacted, after which the alleged drugs – which amounted to 18 pounds – was weighed in their presence and he (the minor) was charged for the offense of drug trafficking.

Inspector Reyes stated that the youth was then arraigned at the San Ignacio Town Magistrate’s Court yesterday afternoon, where he pleaded not guilty to the charge and was remanded to the Belize Central Prison until August 19, 2014.

San Ignacio police believe that the crocus bag belongs to a known drug peddler who operates in the area and that the suspected drugs are part of an influx of cannabis which originated from across the border in neighboring Melchor de Mencos.