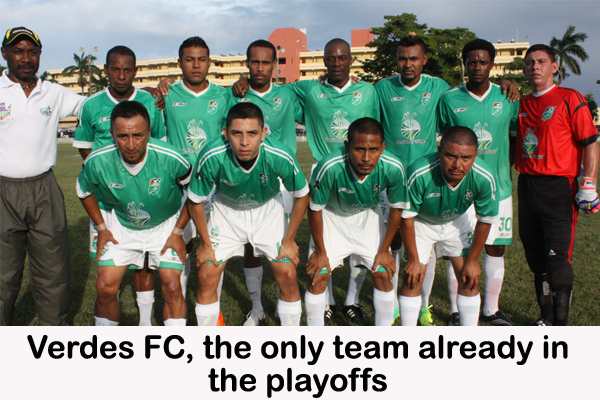 As best we can tell, there has never been a Belize football season, either in the amateur days or in the semi-pro era, as competitive as this one. Seven teams are in this Premier League of Belize Belikin Cup Opening Season 2013-2014 which kicked off in the last week of September, 2013; and with the final regular season games scheduled for this Saturday night, January 11, six (6) teams still have a shot at making the 4-team playoffs.

There were two back matches scheduled for last night, but only 1 was played, at the FFB Stadium, and it was a 0-0 draw between Belmopan Bandits FC and Belize Defence Force FC, who are both now tied at 16 points along with FC Belize, who have already completed their regular season. Both the Bandits and BDF have 1 game remaining this Saturday.

The other back match, Verdes FC vs Police FC, takes place tonight at the Marshalleck Stadium in Benque Viejo, and Police cannot afford a draw; they must win if they are to keep their playoff hopes alive. Verdes is already secure with a spot in the post-season.

Regardless of tonight’s outcome, the fixture on Saturday night will be very decisive, as Paradise/Freedom Fighters can wrest a playoff berth from BDF with a victory in their encounter at the Carl Ramos Stadium. The Bandits are not secure either; a loss to Verdes on Saturday could leave them on the outside of the playoffs, should the Freedom Fighters win and Police also win their 2 remaining games. There are many possibilities; after tonight there will be fewer. This one is indeed down to the wire, just to make the playoffs.

The word tonight is that the Verdes vs Police game has been postponed again, apparently due to weather. No official word has yet come from the League, but a postponement would likely be welcomed by the Police FC squad who can hang on to their playoff hopes a little longer. League leading Verdes will probably be somewhat “banged up” after their clash with the desperate Belmopan Bandits this coming Saturday night, perhaps requiring some rest for their star players going into the playoffs; they would thus present a less daunting opposition for Police FC in their twice postponed back match, which would likely take place next week Wednesday.

Below is the latest position in the standings, following last night’s draw game between Belmopan Bandits and BDF. What a season!

After Saturday’s fixture, there will be one regular season back match remaining – Verdes FC vs Police FC at the Marshalleck Stadium. But if Police fails to win against San Ignacio United on Saturday, their playoff hopes will be over, and the Verdes game would not matter.

All 3 games are bigger than big this Saturday. Carl Ramos, Marshalleck or Isidoro; take your pick for a Premier League football thriller this weekend!