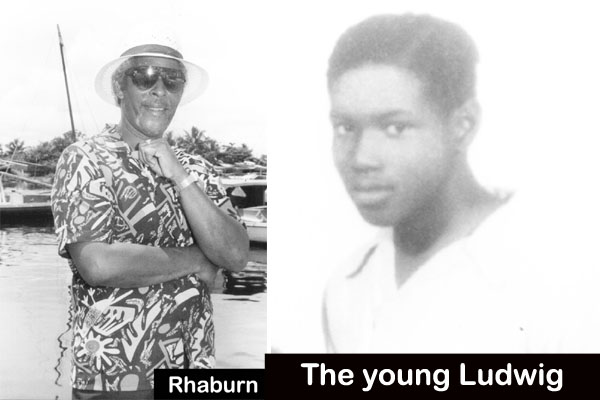 “I don’t remember where we heard the broadcasting of Ludwig Lightburn’s big fights in Madison Square Garden. For sure it was a guy named Don Dunphy doing Ludwig’s fights against lightweight contenders like Ralph Dupas, Orlando Zulueta and Joey Lopes. It would have been on AFRS shortwave radio. Ludwig reached as high as no. 3 in the world. He was British Empire and Commonwealth lightweight champion. In British Honduras we were all very proud of Ludwig, very proud.”

Sunday morning was Ninth of March, and in sailing families, such as the one from which I am descended, this is a holy day. Usually the fresh, sunny southeasters are beginning to take effect by Ninth of March, but they do not dominate the weather as absolutely as they will do in April and May.

This Ninth of March morning, praise God, a southeaster was in effect. I was driving sometime between 7 and 7:30 towards the Kremandala yard on Partridge Street when I heard Captain Nicholas Sanchez call KREM Radio, where our engineer J. C. Arzu was the announcer/technician in control. Captain Sanchez, a great Belizean patriot, was in charge of the annual ceremonies to honor Baron Bliss and other Belizean “heroes and benefactors.” These ceremonies would take place at 8 a.m., and I could hear the regret in Captain Sanchez’s voice when he realized that KREM, tied up with La Ruta Maya, would not be carrying the ceremonies live.

Anyway, my business at the yard was brief, so I decided to drive around by the Baron Bliss ceremonies. The way the authorities organize the event, they block vehicles from entering the official area. So you have to park by the old Customs building/area, which is now the Tourism Village, or by the Radisson Fort George Hotel, and walk the rest of the way.

It was now 10 or 15 minutes to 8. I decided against parking and walking, and, turning left down across Memorial Park into Marine Parade, I switched to LOVE FM to hear the broadcast of the ceremonies. Since “they” took away some of the Baron’s glory by calling Ninth of March a day for Belizean “heroes and benefactors” instead of for the Baron specific, I’ve become a big Baron Bliss fan and, by extension, a Captain Sanchez fan.

I was on my way now to Burrell Boom to see if I could make contact with the KREM Radio Ruta Maya team. I had an amount of time to think, and here is some of what I was thinking. I need to add, “for what it’s worth,” because the best way in Belize to make sure your thoughts remain just that, thoughts and nothing more, is to publicize them yourself. If you want to have your ideas become flesh, then you have to confide in a ruling politician, or someone who is close to a ruling politician. This is just the way it is.

I don’t really agree with Monrad Metzgen on the list of heroes. His claim to fame is that he is the one who conceived the idea of the first Holy Saturday Crosscountry, in 1928, but Metzgen was a member of the colonial establishment and dedicated to same. If you declare Mr. Metzgen a national hero, then Isaiah Morter must receive equal honor, or greater. I’m just saying.

More importantly, I have three candidates for heroes, and the first one will provoke the least opposition. He is Richard “Dickie” Fairweather, our greatest Belizean war hero, a pilot who died in World War II when he was shot down over Nazi Germany.

My other candidates are still alive, and that is usually a little problem when it comes to honors. I make my living writing columns and other things, so the important thing for me is not what the politicians decide to do, but what my readers see as sense and rate as righteous.

If you know me, you will anticipate that I will nominate Ludwig Lightburn, who is still alive in New York City. Ludwig made my generation (and older ones) proud beyond description in the middle 1950s when he fought in Madison Square Garden and beat some of the best boxers in the world. In the world, Jack. In my 2008 book, Sports, sin and subversion, I did my very best to honor Ludwig.

Finally, Gerald Rhaburn is a total icon in Belize’s musical history, but there is more to his resumé. His knowledge includes the sociology and politics of Belize on the ground. On the ground, baby, amongst the people. Apart from his intimate knowledge of Guatemala City, Rhaburn’s musical tours of New York City, Chicago, Los Angeles and other American cities gave him a unique opportunity to interact with Belizeans as they were entering the diaspora between the period from the 1960s to the 1990s. His is special knowledge which would benefit all Belizeans, at home and abroad, now and forever.

As most of you know, Tony Wright has been doing a superb job for two decades in paying respect to Belizean musicians, but radio is not enough in Rhaburn’s case. Where longevity and accomplishments are concerned, Lord Rhaburn is the greatest of them all, and he is not only a calypsonian. Gerald is also a historian and a philosopher. He must be a part of our history books.

I don’t want to go on too much. I will take the opportunity to say this, nevertheless. Gerald has given me the greatest compliment I have ever received, and I want him to know that I cherish this, and I hold him in the very highest of esteem.

On Sunday morning when I checked my e-mail, I saw that Elma Whittaker Augustine had mailed me the day before to say that her...
Read more
Publisher

A few months ago, I discussed the incredibly sensational case of a wealthy, prominent Belizean who in some respects was a he-man in behavior,...
Read more
Publisher

“Like the Freemasons, the Confederacy of the Humbled is a close-knit brotherhood whose members travel with no outward markings, but who know each other at...
Read more
- Advertisment -