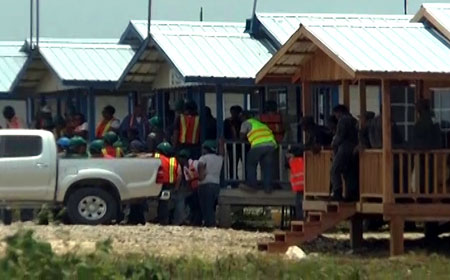 VALLEY OF PEACE, Mon. Apr. 13, 2015–Not long after the work week started at Santander’s sugar milling facility today, a group of approximately 75 discontented employees initiated a protest on the premises.

The reason, we were told, is that some of the workers believe that they are being underpaid and subjected to unjust working conditions, among other issues.

When Amandala arrived at the area just before midday, three truckloads of riot personnel from the Belmopan police were leaving the compound, since tensions had subsided by that time, but we were informed that some six officers remained stationed at the facility, which is presently under construction, in order to keep the peace.

A few of the workers who participated in the protest spoke with the media this morning, and they said that they felt cheated by their employer, which allegedly has been paying them much less than had been promised.

Arsenio Marshall Estrada, who is originally from Dangriga, said that he has been a welder for 17 years, but since being employed by the company for a year, his skills and experience have been overlooked.

Estrada noted that he has approached the principals of the company several times about the matter, but was told that if he is not satisfied with the $40 a day that he is being paid, then he can “just go home.”

Arturo Marroquin complained that he had been in the same situation, but in his case, he was fired for “talking for his rights”.

Marroquin explained that recently, he was only paid $150 for 13 days of work, including holidays, which was less than half of what he was supposed to collect at the rate of $35 per day.

“I told the man that this is not what I am supposed to collect, and he told me that if I don’t like that, then I can walk out, then later, he fired me and told me, ‘I don’t want nothing to do with you’”, Marroquin declared.

Another outspoken worker, Henry Calderon, told reporters that the employers have insulted their intelligence because he is supposed to be paid $669, but has only gotten $650 for the past few weeks.

He added that even though his job is quite risky, the company has not provided life insurance or any other such benefits.

Ulridge Pott, who is from Armenia Village, Cayo District, maintained that the unfair treatment of workers has been occurring “from ever since”.

He alleged that the company “treats them like animals and slaves”, which is not the way they expected to be treated.

He also mentioned that there is a canteen that sells refreshments on the compound; however, the items that are sold are overpriced.

“The shop here is expensive, a $1 water is $2 here, and pack of bread is $5. Also, they are putting our food in a container that is hot, and so it gets spoiled easily. We are fighting for a raise from $35 [a day] because we believe that we are being punked. They are giving preference to Guatemalans … Belizeans get $35, while Guatemalans get $70 and $80 [a day] and we both do the same job”, he complained.

We understand that the company’s executives met to discuss the issue today and agreed to make a compromise with the workers.

The company, which is managed by a group of Guatemalan investors, promised to issue a statement addressing the matter today, but so far, no such statement has been forthcoming.