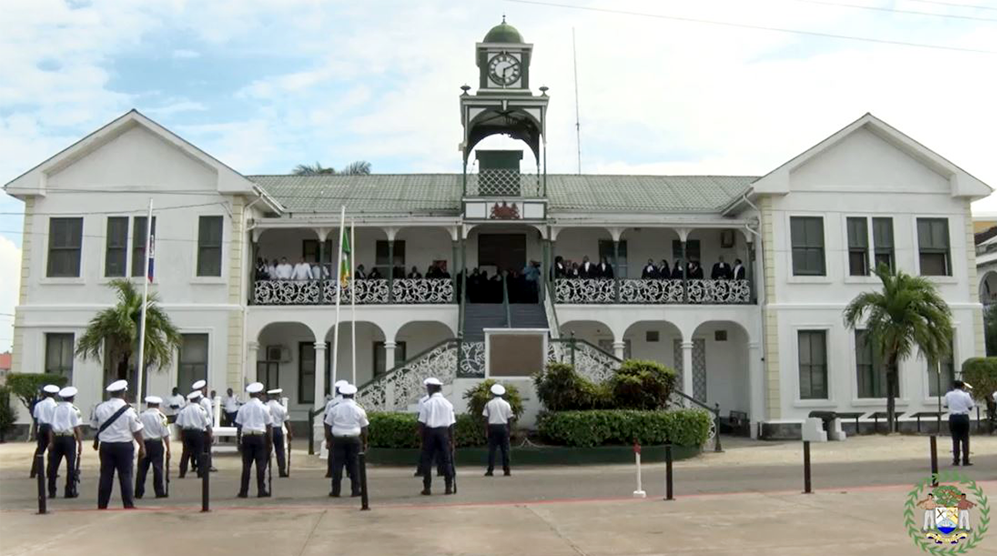 Belize’s judiciary officially launched a new legal year this week at an annual commencement ceremony that was attended by various personnel of the Senior Courts of Belize—including the High Court, formerly known as the Supreme Court. The proceedings were prerecorded and released virtually on Tuesday morning and featured the usual formalities, such as the Inspection of the Guard of Honor and the Inaugural Address, presented by the newly appointed Chief Justice Hon. Madam Louise Esther Blenman.

In her address, Chief Justice Blenman cast a spotlight on the recent judicial reform that has resulted in the amalgamation of the Court of Appeal and High Court (formerly Supreme Court) in a Senior Courts system under her headship and commended the government for the introduction of new offices and posts in the judiciary which should reduce delays in the delivery of judgments.

“On the 7th of November 2022 there was a significant and comprehensive legislative reform by the promulgation of the Senior Courts Act. This far-reaching legislative reform was specifically aimed at improving the administration of justice. Indeed, it is of significance that the court’s structure was modernized and enhanced by the creation and establishment of the Senior Courts, which consists of both the High Court and the Court of Appeal. Under this legislation, new judicial offices were created. These include the offices of Master, Chief Registrar, and Judicial Research Assistants. The expectation is that all of this will result in the improvement of the delivery of timely, efficient and effective justice in Belize. The Government of Belize must be commended for its visionary legislative changes, the cumulative effect of which will contribute to the enhancement of the administration of justice to better serve the people of Belize,” she said.

The Chief Justice also made reference to past challenges of the court, including four vacancies on the bench which were later filled as a result of the efforts of Attorney General, Senior Counsel Magali Marin-Young and the office of the Commonwealth Secretariat. Apart from the backlog these vacancies created, the judiciary also took a hit to its infrastructure as a result of the landfall of Hurricane Lisa, which caused the roof of the Supreme Court to collapse. Attorney General Marin-Young spoke about these challenges and the current plans to address them:

“It has been two years in office. My first year was spent getting a proper assessment of the extent of the neglect and the many challenges facing my ministry and the judiciary. Both the High Court and the Magistracy Court infrastructure were in a state of disrepair and decrepit conditions with mold-infested offices and poorly maintained courtrooms and facilities … Despite the challenges of 2022 with hurricane damage to our court infrastructure, we managed to implement major legal reforms which we anticipate will assist with the more efficient dispensation of justice. We do, however, have much work to do to improve our court infrastructure – some of which were programmed to be done in 2022 but had to be delayed for various reasons. We had hoped to relocate the Family Court to the Charles Bartlett Building in 2022, but we had setbacks with the retro-fitting of that building in that the Belize Tax Service did not fully vacate offices until mid-year 2022, and the Elections and Boundaries Department did not vacate that building until the latter part of 2022. Nonetheless, the Ministry of Infrastructure, Development and Housing has assured me that repairs are to commence January 2023 and the Family Court, Legal Aid and Vistal Statistics are to be relocated before the end of 2023,” Marin-Young said.

The AG mentioned that in spite of the delays, the various magistracies were still able to incorporate much-needed legal reforms which the judiciary believes will improve their services going forward. The president of Belize’s Bar Association, Senior Counsel Edmund Andrew Marshalleck, also delivered remarks in which he outlined high hopes for the newly reformed court system and for the judiciary as a whole under the stewardship of the new Chief Justice. SC Marshalleck, however, also noted that Belize’s legal system will not be able to deliver on their mandates fully without the establishment of a judicial fund. He said that the courts “will have no chance of the successful delivery of justice of they are not sufficiently funded.”