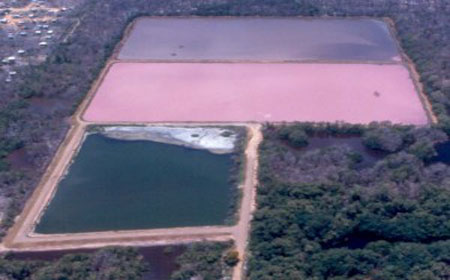 BELIZE CITY, Mon. Mar. 16, 2015–Last year, Amandala reported that nearly 90% of structures in Belize are actually not connected to sewage networks built by Belize Water Services (BWS), the only utility company responsible for providing those services on a commercial basis in Belize. What is of even more concern is the fact that a substantial amount of sewage waste makes its way into the waters surrounding the old commercial capital – Belize City – and a lack of foresight in development planning has meant that major tourist destinations, premier among them being Placencia, are now grappling with ways to establish a proper sewage treatment system to accommodate and more importantly preserve their peculiar environmental assets.

Appearing on KREM Sunday Review on March 15, 2015, Roberto Pott, Belize Coordinator of Healthy Reefs for Healthy People, pointed to major concerns with sewage waste treatment disposal both in the Belize City area and in Placencia in a discussion with Yaya Marin-Coleman, the host of the show.

Pott indicated to our newspaper that water wells in areas where sewage treatment facilities are inadequate have also shown contamination with fecal matter.

We understand that sewage outflow pipes place some of this discharge near the Radisson Fort George Hotel and Marina, where smelly backflow is sometimes dumped into the sea. Water quality tests have shown a high presence of E. coli and coliform, evidencing fecal contamination, and so swimming in this area is discouraged.

Amandala understands that environmental authorities have been concerned about the level of sewage effluent discharge from Belize City into the surrounding coastal waters, which are not recommended for swimming. Although it is common to see youngsters swimming in the Hangar area and near BTL Park, those areas are known to have unsanitary levels of sewage effluent discharge.

We also understand that some seepage occurs from time to time whenever torrential rains flood Belize City’s streets.

Originally, Belize’s sewage network was designed to allow emergency outflow of partially-treated sewage to the sea; however, we understand that the outflows have become far more regular than originally intended.

Environmental authorities continue to work behind the scenes to address liquid waste management concerns; however, a lot depends on the installation of new and expanded infrastructure to cope with the rising demand posed by today’s development realities.

Pott notes that no location has yet been picked for the Placencia sewage treatment facility, and there would be environmental considerations, depending on where Belize Water Services actually decides to place the facility.

He furthermore explained that in Placencia, everybody uses septic tanks and soak-aways, but the extent of development on the peninsula has far outpaced the existing sewage infrastructure. He said that this underscores the need for better coastal zone planning that would include physical planning.

We understand that in the case of Placencia, baseline studies are due to commence within the coming months which will allow BWS technicians working out of the company’s Seine Bight lab, set up by German contractors, to conduct a nutrient-fate assessment, to determine what would likely happen to sewage that may leak in the Placencia area, to what extent such a leakage would occur and what could be done to address the problem. These data would also be used to develop an Environmental Impact Assessment (EIA) for sewage treatment facilities on the peninsula.

Our information is that about two years ago, the US Government financed a feasibility study for the Placencia sewage project, which was carried out by Halcrow. A prior feasibility report done by Engineers Without Borders (EWB), the Sacramento Valley Professional Chapter, presented 4 wastewater treatment alternatives, but the Halcrow report presented two – one to the north and another to the south, with treatment ponds located off the peninsula, on the adjacent mainland of Stann Creek.

Previous estimates for the Placencia project ran in the range of US$14 to US$20 million, but only US$10 million was secured with funding from the Global Environment Fund, with matching funds from the Government of Belize.

A 2014 report of the Inter-American Development Bank (IDB) titled, “Water and Sanitation in Belize”, noted that there are only 3 sewerage systems, in Belize City, Belmopan, and San Pedro Town, and only 11% of Belize’s population is covered. It added that the treatment facilities in Belize City and San Pedro provide secondary treatment, while the facility in Belmopan provides only primary treatment.

The report noted that in 2014, BWS planned to start construction on a wastewater treatment plant on the Placencia Peninsula, to be funded by the IDB and the Global Environment Facility; however, we understand that no construction is imminent, since the company has yet to conduct background studies and craft an EIA.

The report noted that the project will provide wastewater services to the second largest area of tourism growth, which includes 3,000 inhabitants and 7,000 tourists.