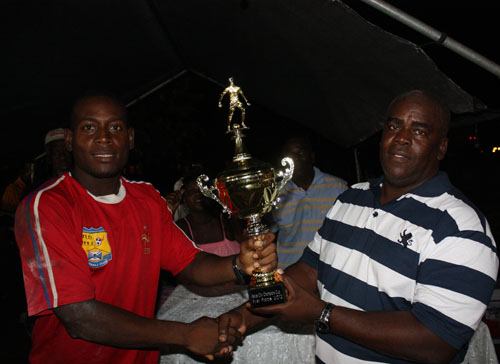 After a late start and an uneventful exhibition between F.C. Belize and R.G. City Boys at the MCC yesterday, the nightcap game 2 of the Belize City Champions Cup finals series between BDF and West Lake was a well-contested 2-2 draw that saw West Lake briefly take the lead in 2nd half, before BDF equalized.

It was not a big crowd on hand to witness the nightcap, the final game of the competition. Understandably, with BDF sporting a 6-1 lead from last Sunday, the championship was a foregone conclusion. BDF coach Palmiro Salas admitted that the game was uninspiring for his team, but they had to play to protect their lead; and West Lake was determined to prove they were better than what happened last week. And that they did. Sweeper Kishane “Grill” Pech and goalie Charlie Slusher did not appear with West Lake for this one, but the rest of the back line from their previous match against F.C. Belize was there, with Leon Rowley on the left, veteran Allie Thurton roaming and Shannon Flowers on the right. Jarret Davis took up the sweeper position. And they held off the well oiled BDF attack until the 41st minute, when Byron Usher converted after Ralph Flores reached the right goal line at the southern end and drove a grounder across goal for the oncoming Barrow. Ten minutes earlier, West Lake’s rookie goalie Egrald Burgess had come out too tentatively and was beaten to the ball by BDF’s Marlon “El Matador” Meza, whose grounder past Burgess was headed for the open net, when West Lake’s Leon Rowley appeared from nowhere to clear the ball just before the goal line, a sensational save that left him tangled up in the net.R.G. City Boys struggled to “make team,” although the scheduled 3:00 p.m. opener started over half an hour late. They fielded 10 men until Ryan Simpson completed the eleven at 14 minutes into the game. Nevertheless, the City Boys still held F.C. Belize to a scoreless draw, despite finishing the game with 10 men, after Bredda Thurton was ejected by referee Luis Lucas at the 11th minute of 2nd half for challenging F.C. Belize goalie Glen Chimilio’s clearance kickout. 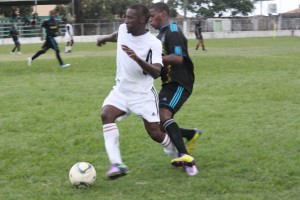 Of note in the match was the appearance, after some pre-game negotiation among City Boys coach John Pollard, tournament organizer and F.C. Belize coach Marvin Ottley, and referee Luis Lucas, of previously suspended David “Dav” McCaulay, Jr. in the City Boys line-up. Dav had been serving an indefinite suspension for serious misconduct some 4 games back. One of the top attacking midfielders right now, Dav’s return is a big plus for the Premier League campaign of R.G. City Boys. Also of interest was the entry on a substitution in the game of the veteran David “Manu” McCaulay, who played alongside Jr. in midfield for the last 20 minutes of the game. For their part, F.C. Belize used the training match to experiment with two newcomers in the striking department. But neither Reynaldo Gonzalez nor Owin Ortiz seemed to have “all the goods,” so F.C. are still to effectively replace the likes of Byron “Barrow” Usher (to BDF), Jeromy “Jarro” James (inactive), and Gilroy “Bredda” Thurton (to City Boys).

West Lake equalized at the 10th minute of 2nd half (55th minute) on a powerful header by Evan Mariano, after Shannon Flowers drove the right side and made a good center. Immediately, BDF coach Salas inserted the high voltage Erwin “Bird” Flores into the attack, replacing the talented but still under-producing Ralph Flores. Six minutes later, West Lake’s Andres Makin, Jr. made a long center from the right side, and BDF right defender Tyrone Pandy tried to head the ball away from a challenging Evan Mariano; the ball seemed to be going off on the left side, and BDF goalie Frank Lopez followed it and watched it drop, quite within his reach, right into the corner of the net, before he realized that it was not going off the field of play. It was an embarrassing moment that put West Lake ahead, 2-1. But we were not finished writing the entry into our notebook, when we were looking up just in time to see Bird driving a header into the ground on the other end, as West Lake goalie Burgess was caught out of position on a center. The superlative goal instincts of Bird told him there was not time enough to control the ball or let it fall to the ground; to pounce immediately with a header, before goalie or defence could recover, was the essential difference between a goal, and a failed attempt. Bird again, 2-2 ball game.

It ended that way, 2-2. BDF are the champs with an aggregate 8-3 advantage; but West Lake had regained some of the respect they had earned on the MCC by reaching the finals for the second year running in the Belize City Champions Cup. And BDF look poised and ready to do something that hasn’t been done before, at least as far as we can remember. After all, they are the three-peat BPFL champions; and the last BPFL tournament was aborted; so they can now make it 4. It is possible.

(Ed. Note: We are still waiting for an official release from the Premier League of Belize on the start of their tournament. Reliable sources tell us there is an emergency congress meeting tomorrow, to settle differences regarding the teams that will participate in the PLB tournament.)