Evon Michaels and family emerge from the ashes 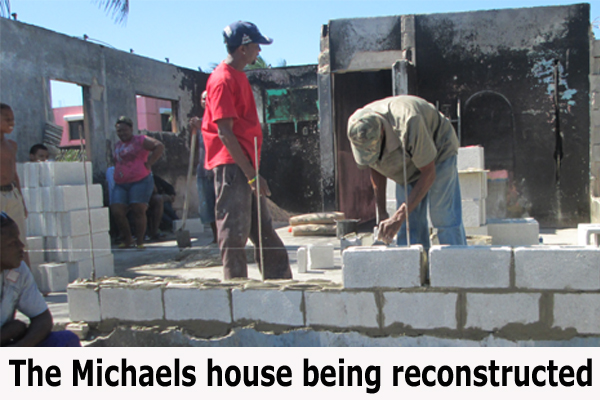 Six days after Evon Michaels and her family, consisting of 10 people, were left homeless after a fire completely destroyed their house and belongings on Giles Street, the family is making an effort to rebuild their one-flat concrete house, on a self-help basis, and with assistance from family, friends and neighbors.

The reconstruction of the house began today. Evon said that she has no choice, because they need a house to live in. She has meager resources which she is using to begin the construction, and is asking for help from the public – whether in the form of construction assistance, or material contributions. Those wishing to contribute can reach family members at phone numbers 632 – 7180, 602-8880, 663-8056 or 629-9764.

Josephine Michaels, 24, Evon’s daughter, who is the mother of Ryon Martinez, 8, said that she and her mother, along with the children, were at home on Friday, when they lit two candles, one in the hall and the other in the front room where the children were.

Shortly after, the children ran out of the room and saw that the room was on fire. Her son, Ryon, reportedly ran under the bed and became trapped by a burning mattress. He was taken to the Karl Heusner Hospital, where he was admitted with 2nd degree burns. He was later released, and is recovering with the family. She must take him to the hospital every day to renew his dressing, and is scheduled to see the doctor again in two weeks. Josephine said that his condition has improved.

To help Michaels and her family, DJ Brick City has organized a free concert at the football field behind the Charles Bartlett Hyde Complex on Mahogany Street Extension on Saturday. The public has been urged to attend the event and to take donations in the form of money, food, clothing, or construction materials.