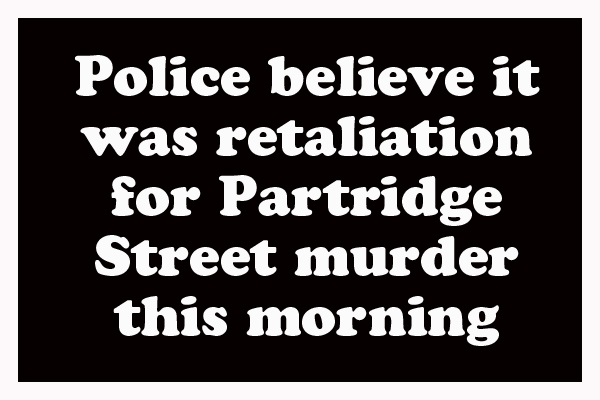 Eddie Nelson Sorieno, 17, of Banak Street, was shot down at about 8:00 tonight by one of three men who rode up to him and opened fire as he was walking in front of the Meighan’s residence, just a short distance from his house, located behind the Meighans.

Sorieno was going to buy food for his little brother and sister’s children when the attack occurred. He was shot in his head, chest and body six times, and died almost immediately. The killers then rode up Banak Street and disappeared into the area.

He is the second person to be shot to death today, within a 12-hour period.

Police believe that the shooting was retaliation for the shooting murder of Gary Bowen that occurred this morning after 8 on Partridge Street. Police say that they believe that a killer from the Mayflower Street area shot Bowen, and persons from the PIV area went into the Banak Street area for revenge. Anyone at that time was the target, they say.

She was at the KHMH when they were called and told that Sorieno had been shot. The grieving sister told us that it was not expected, because he was not a trouble maker, was not into gangs and violence. He was employed, but had taken off the day today from work, to assist in babysitting the children while she and their mother were at the hospital. She is still at a loss and cannot think of any reason why he was killed.

The sister said that they had been thinking about relocating from the area, because on several occasions gunmen would go into the area and fire shots. She said that they would mostly stay indoors, and rarely come out. They saw that the area was dangerous, and were planning to move when this happened, she said.

A friend and neighbor told Amandala that shortly after Gary Bowen was killed this morning, Gang Suppression Unit officers (GSU) went to the area and conducted searches. Five men were found in the Meighans’ house, and they were searched, but nothing was found.

GSU then conducted frequent patrols in the area. She was more than surprised that the gunmen managed to carry out the shooting, she said. The neighbor said that Sorieno had left home and had returned, and was coming out again when the gunmen struck.

Although he was 17, he was more like 15 because he was so young, she said.

Another witness said that Sorieno was just walking when the gunmen rode up and shot him three times in his head, and three more times in the body.

So far, no one has been arrested or detained.