2 referees in need of public’s assistance after traffic accident 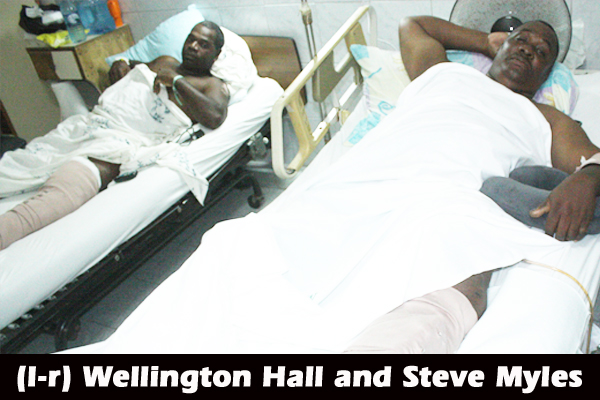 The present health status of two well-known local football referees who were knocked down after 10:00 p.m. on Friday, February 28, near Los Lagos on the Philip Goldson Highway underscores – yet again – the dangers posed by drivers who apparently have no problem jeopardizing the lives of both themselves and innocent civilians by consuming too much alcohol before getting behind the wheel.

Last week we reported on a traffic accident in which two motorcyclists almost lost their lives after a careless driver who was overtaking another vehicle nearly ran them over at about Mile 12 on the Philip Goldson Highway.

Today, when we checked in with the victims, who are still admitted at the Karl Heusner Memorial Hospital, they told us that they are completely unaware of the status of the police investigations, but more importantly, they need the public’s assistance to defray mounting medical bills which they have accumulated since being in the hospital.

One of the victims, Steve Myles – a career football referee who works with the Central Health Region, told Amandala that he went to assist his friend and fellow referee, Wellington Hall, with some work in Maxboro when they were hit by an allegedly drunk driver.

Myles said, “When we were coming back down from installing electricity for residents in Lords Bank, Ladyville and Maxboro, we saw a vehicle approaching us by Mile 12, and suddenly, another vehicle appeared from behind, trying to overtake the first one. I saw the vehicle [a Kia Sportage] coming straight at us, so I tried to avert an accident by driving off the road, but the vehicle went off the road too, and still hit us, and we suffered injuries to both our left legs.”

Myles told us that he is uncertain of the extent of his injuries, and may even lose his leg due to the severity of the damage, while Hall’s injuries are less severe, but serious nonetheless.

While Myles has a 50% chance of losing his leg, his friend’s leg is broken in four places. Myles said, “I will be here [in the hospital] for a while, so I will need a helping hand from the public in terms of paying my hospital bills.”

The victims mentioned that they are still waiting on the police to come and record their statements with regards to what occurred on the night that they were knocked down. As a matter of fact, the men stated that the only occasion on which they heard from the police was when they were instructed to take the driver to court, which leaves a discouraging taste in their mouths as it relates to justice being served on the side of the law enforcement authorities.

Today, ASP Chris Noble, Officer in Charge of the Belize Rural Formation, told us that they do have a person of interest that they are looking for, and that their investigation should conclude shortly.

Credible sources told us, however, that the driver – who was allegedly drinking at the time of the incident – was detained by police and the vehicle impounded, but he was later released hours after the accident occurred.

According to Myles, his prognosis from the doctors is that if all goes well, his injuries may heal by late October of this year, while Hall said that his injuries are scheduled to heal within a couple months.