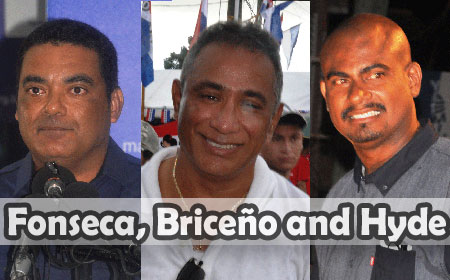 BELIZE CITY, Tues. Dec. 15, 2015–After four years of rule by Hon. Francis Fonseca and his national executive, during which the Opposition People’s United Party (PUP) had disregarded its constitution and undermined its own internal democratic principles, the PUP closed nominations for leadership and other posts today at 5:00 p.m.

Three persons had been nominated for the post of Party Leader and a slew of others were nominated to fill the 11-member PUP executive, elections for which will be held on Sunday, January 31. The venue has not yet been announced.

Since its November 4 general election defeat, and the subsequent resignation of Mr. Fonseca as PUP leader, the question preoccupying the minds of political pundits was who would emerge to lead the defeated, divided PUP, which had only agreed to hold a national convention after 12 standard bearers rebelled against the status quo.

Initially, those who went on record that they would consider running for PUP Party Leader were John Briceño and Cordel Hyde. Names like Julius Espat and Kareem Musa entered the narrative, but eventually faded into the background; Senator Lisa Shoman, however, subsequently announced that she too had her eyes on the leader position.

As the date for the nomination approached, however, very little was heard from Senator Shoman about running for the top post.

Then a big surprise to most observers came last Friday, four days before the nomination date, when Julius Espat, PUP area rep for Cayo South and one of four Deputy Leaders in Mr. Fonseca’s executive, in a telephone interview with 7News’ Jules Vasquez confirmed that Francis Fonseca had been approached by a group of 11 constituency heads who want him to return as leader of the PUP.

Espat said Fonseca and Dolores Balderamos-Garcia, another of the former four Deputy Leaders, had attended the meeting, which was held in Belmopan, presumably at Espat’s Structure Architects office.

During the interview, Espat dismissed Fonseca’s resignation as an “emotional decision at the time” following the party’s defeat.

Fonseca’s decision in late 2015 to seek a return as PUP Leader bears similarities to his decision in late 2011 when he accepted the reins of PUP leadership after the Interim Leader, Mark Espat, stepped down—Fonseca reportedly had to be persuaded by members of the George Price family to accept the appointment.

Following defeat after defeat at the polls, Fonseca did what any other failed political leader would do, and that is, resign.

Many believe that, with the leadership of the party up for grabs and the G-7 and G-11 rebels, Hyde and Briceño, espousing a return to the party’s social justice roots, the so-called “old guard” panicked and rushed into a power play to resurrect and repackage Fonseca.

And notwithstanding Francis’ catalogue of electoral defeats, Espat thinks that Fonseca is the right person to lead the party at this time.

Briceño, who stepped down as leader in October 2011, citing personal reasons, is trying to make a comeback and is being supported by seven of the eight Northern constituencies, which nominated him.

Both Briceño and Hyde were leaders in the breakaway group of 11 standard bearers who were demanding internal reform of the PUP earlier this year.

Fonseca was nominated by the chairmen of the southern, and some of the western constituencies.

Both Briceño and Hyde were also instrumental in the G-7 Cabinet movement in August of 2004 which challenged the status quo of the Said Musa/Ralph Fonseca administration and its mishandling of public funds.

Despite their differences with the so-called “old guard,” Hyde and Briceño remain popular in their respective constituencies and registered massive consecutive electoral victories; neither man has ever lost an election.

It remains to be seen if an alliance will be formed between any two of the three contenders for PUP Leader.

The last time the PUP had a convention to select a leader was in March 2008, when Briceño, Fonseca and Mark Espat were lined up for the big contest. Espat ended up withdrawing from the race, leaving Fonseca and Briceño to battle it out. Briceño came out on top, defeating Fonseca, who was the old guard’s favorite.

Interestingly, neither Hyde nor Briceño decided to nominate a slate for the other executive positions; Francis Fonseca, however, entered a full slate.

“For the post Of National Campaign Manager, we received one nomination – Victor Espat.

“For the post of Legal Advisor, we received one nomination – Anthony Sylvestre, Jr.

When he was asked if the party was encouraging slates, Usher replied, “I can’t make a decision by myself as to how the ballots will look, whether it will be a slate or whether or not there will be individual ballots you vote for. That’s a decision that would have to be made at the National Party Council.”

Usher went on to state, “What I can say is that in my discussions with two of the candidates nominated for Party Leader, that being Hon. John Briceño and Hon. Cordel Hyde, in separate meetings with them and myself, they both expressed the view that they would prefer that we go the route that we did many times in the past, and that is, select a leader and following that, we have the election for the National Executive.

“Of course, that’s a matter that would have to be brought up at the National Party Council if it’s going to be that way. And that’s why I can’t really pre-empt any answers to the question you asked just now.

“Hon. Cordel Hyde mentioned to me that he does have a slate, but because of his views on the matter, he didn’t want to put in a slate. As well, Hon. John Briceño made the same sentiments to me, that he has a slate that he wanted to put forward, but because of this movement now towards just electing the Leader – that they would have preferred to let it be thrashed out at the National Party Council.”