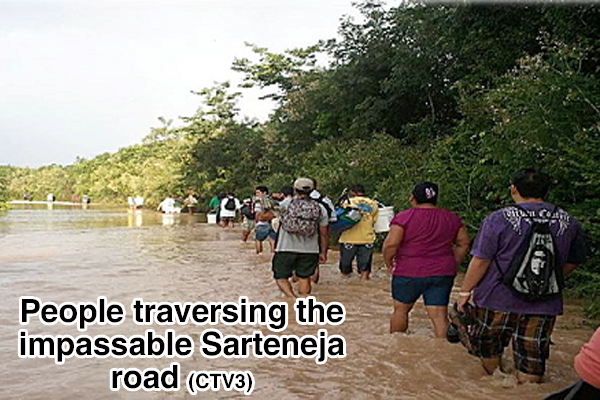 As we go to press tonight, the nation of Belize continues to experience torrential rains as a result of a northeasterly airflow over the warm Caribbean waters – making for another wet month at the tail-end of the 2013 hurricane season.

Gentle said that the daily weather readings have been showing that for the past two weeks, there has been incessant rainfall on most days. However, he said, they expect the intensity of the rains to taper off a bit during the next 24 to 36 hours, with a return to normalcy on Saturday and Sunday.

Last month (October) was wetter than usual and the flooding being experienced across the country now has resulted from an accumulation of continuous rains. The outcome was tragic for Cayo last night.

According to the National Met Service, a flash flood was reported during the night of November 13, specifically in Santa Elena town and Central Farm.

Belize should get some reprieve going into the weekend, since an east-southeast flow is expected to push showers to the north of us.

The Atlantic Hurricane Season closes in just over two weeks, with 12 named storms having formed since June 1. Gentle noted that so far, there have been less named systems than projected.

Meanwhile, the past weeks’ rainfalls indicate that November may, like October, prove to be another unusually wet month.

The outlook, Gentle said, depends on the type of cold fronts we get. He said that the onset of the dry season usually coincides with the passage of strong cold fronts. More weak cold fronts could mean more rain.

“Hopefully we get strong enough fronts to usher in the cooler and drier air and less rainfall,” Gentle said.