9 families blocked from homes; alley taken in by neighbors 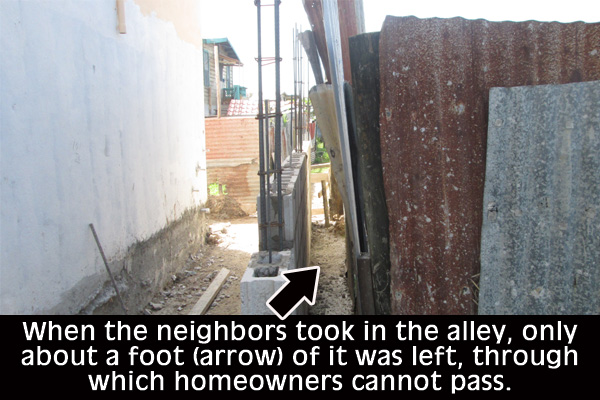 A group of about nine families, living behind the newly constructed Tow Tow building on Mahogany Street Extension near Tibruce Street, are having difficulty accessing their homes because the alley leading to their properties has been blocked by neighbors who have fenced in the alley as a part of their respective yards.

The families are presently using the yard of the new building to access their homes from Mahogany Street Extension. The owner of Tow Tow is presently constructing a concrete fence around the property, but out of consideration for the affected residents, is hesitating to complete the fence, since the families would then have no access to or from their yards.

Joan Harris, a resident of the area, told Amandala that it is only due to the kindness of the owner of the new building that they are able to get into their homes. She would like the Mayor and the City Council to knock down the fence built across the alley and reclaim the alley from the neighbors who took it as a part of their yard.

She says that she has spoken to the Mayor and last Friday, reps from the City Council went to the area, but so far, nothing has been done. The Central Building Authority and the Fire Marshall were even made aware of the untenable situation, which is also dangerous because there should be a route for exit for the residents in the case of a fire or other emergency in the area.

However, Harris was told by a City Council official that the issue of the alley, which is Government property, is not a priority, so the affected families should get together and approach the unscrupulous neighbors, or make an appeal to their area representative to take it up with Central Government.

Harris said that the Tow Tow owner is not obligated to accommodate them, and there is nothing holding him back from completing the construction of the fence, except his kindness. He has indicated, however, that he wants his fence to be completed.

While the officials make excuses, she said, they are suffering.