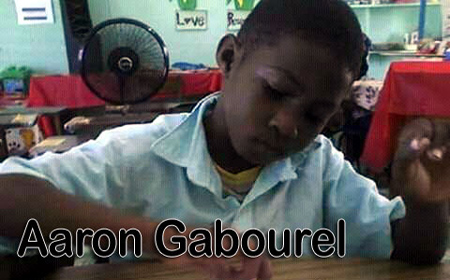 BELIZE CITY, Thurs. Oct. 6, 2016–The Hamilton family on Aloe Vera Street in Lake Independence has not only lost the place they called home, but the life of an innocent 11-year-old child that was their son, nephew and brother.

Seven persons, of whom four were children, were all at the Hamilton’s residence sometime after 8 o’clock on Tuesday night when an arsonist and now murderer stormed inside. He quickly doused the living room with gasoline and also threw some on the father, struck some matchsticks and ran outside.

Aaron Gabourel, a student at Stella Maris, was asleep in his bed at the time. His father, Winston Gabourel, Sr., who was partly on fire, nevertheless ran to the bedroom to try to rescue his sleeping son.

However, it was a failed attempt. The child had been too badly burnt on his arms and back, and lost his life as a result of the fire.

Cousins of Aaron Gabourel — Jeremiah Hamilton, 11, Empress Hamilton, 8, and Ian Sambula, 4 — were all inside the living room with their mother, Melissa Hamilton, watching television at the time of the attack.

Empress Hamilton and Ian Sambula suffered terrible burns before their mother made them run out of the burning house.The two suffered burns to 95 per cent of their bodies, classified as second and third degree burns.They are both listed in a critical condition and are on life support at the Karl Heusner Memorial Hospital (KHMH).

Their mother, Melissa, revealed that the man who entered their house was of fair-skinned complexion, wore a pair of brown cargo pants and had wrapped a brown shirt over his face to conceal his identity. However, his eyes and red hair were visible.

According to the mother of the deceased child, Caroline Hamilton, this is not the first time her home has been burnt down. Our records show that in May of 2015, she had previously been the victim of another act of arson.

Hamilton further revealed that a man with whom she has had a long-standing land dispute had threatened her 14-year-old daughter some time ago that he would make them cry.

Hamilton is now longing for revenge for the pain and sorrow she has suffered from the death of her son.

ACP Chester Williams today, Wednesday, told our newspaper that one person of interest is being sought and that there are leads which the police department is pursuing.

Police information reveals that the arsonist turned murderer fled the crime scene in a boat on Haulover Creek, the same boat that he had apparently used to arrive at the Hamilton’s residence (Aloe Vera Street runs to the riverside).

While police investigations continue, efforts to get treatment for the badly burnt survivors of the fire are underway.

Yvette Burks of the Burn Victims Mercy Fund is working to have Empress Hamilton and Ian Sambula flown out to Shriners Hospital for Children in Galveston, Texas, which already has agreed to treat them. We were told today, Thursday, that the children should be flown out today.

However, the fund has to cover the cost of two air ambulance trips for a total of approximately $US 39,000.