Athletics past and present – Louis Haulze 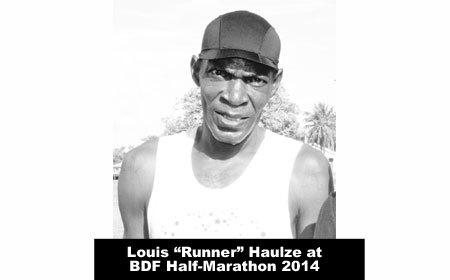 BELIZE CITY, Wed. Feb. 4, 2015–Greetings to one and all! Welcome to another in our series, “Athletics past and present.” To those who do not know, this article had its genesis back in 2010-2011. The primary focus of the articles was to educate and honor those outstanding runners (athletes) from the past straight to the present. This week’s article is about a man that needs no introduction to anyone – Mr. Louis “Runner” Haulze.

This 48 year old employee of Belize City Council has a long and outstanding career in long distance running, and at his age (he will be 49 in April) does not seem to be slowing down anytime soon. Mr. Haulze told me that his running had its birth at age 13 in primary school, St. Joseph Primary, to be exact, in a competition called Olympic Day Run, featuring all primary schools at the time. Mr. Sosa, who was the coach at the time, encouraged him to compete, so he did. Although he had never run in a race before, he decided to run, and it was during the 1500m race he ran that he fell in love with running. He said he felt free, and relief, and had a great feeling, because at the time he was not doing well in school, so this was something he found natural, and he was good at.

The following year, at the tender age of 14 years old, he entered his first big race. That was the Annual Holy Saturday Half Marathon Classic against great runners at the time like Eugene Muslar, William Bailey (deceased), and Mark Stephens (also deceased). He placed fourth in the race, his first big race. Mark Stephens won that race. From there, he ran every Holy Saturday race.

The half-marathon (13.1 miles) was the distance he loved, but he tried his hands at a 10k race, which is 6.2 miles. The 10k race was the annual Z-Line Classic. Memories flash back of his good friends Ernesto Reed and Fernando Galvez, better known to everyone as “Journey,” who ran those and most races from the late 80’s down to the 90’s. Other legendary runners of that era, besides those guys, were Donald Bowen, a foreigner, Eugene Muslar, Joseph Carr, and his protégé at the time, William Mahler, just to mention a few.

Tragedy struck; and, due to getting caught up in the street life, he ended up getting shot. To this day, he still has two bullets lodged inside him. This put him on the shelf for ten years, before he decided to run again.

It was a morning, while watching a half-marathon race passing on Central American Boulevard, and seeing his close friend Journey close to the finish and was looking to vomit, so he ran by his side and touched him, and trying to tell and encourage him that he was almost there, just hold on. This caused Journey to be disqualified by the then president of the Belize Amateur Athletic Association on the grounds that the official race rules in the books states that you cannot in a race in any way touch a runner; so Muslar won. This sparked a fire in him, and he told himself he wanted that title, and to be the number one, the top dog; he was laughing while he said that.

A year later, after 10 years, he ran the B.D.F race, a race at the time that was getting popular due to the Holy Saturday Classic Race not being held again at the time. That year, he went against a youth who was dominating at the time, Aubrey Solomon. He got third place. He noted that he was very scared when he ran, because, after being shot multiple times, he never thought he would ever run again; but by the grace of God, he did.

Then he met Mr. Ian Gray, a Belizean runner, who had been living in the States, and was a great runner, both locally and abroad. Gray told him, “You are running too long a time to not win something;” and he gave him training and advice. Thus, he won the B.D.F. race four times. He stated that in his last 3 races recently, no one 30 years and older has beaten him. Proudly he smiles, while saying that “for a 48 year old I am still going.”

His advice to all youths is, work hard, and if it’s running you like, give it your all. And he is willing to help them learn. Also, do not get into street life and crime. He’s a perfect example. “God gave me a second chance; not many people get that. Although I have to live with two bullets in me, I thank God. From the time I got shot, I left the street life behind, and running is all I focus on up to this day, running everyday roughly 13 miles.”

He would like to thank God first and foremost; his mom, Mrs. Herthen Haulze; Palo Musa and family; Mr. Evan X Hyde and his 3 sons: Mose, Mike and Cordel for always supporting him in running; and the help of his good friends Ernesto Reed, Fernando Galvez (Journey) and Ian Gray.

I want to say thanks and wish Mr. Haulze all the best and good luck in the revival of the Annual Holy Saturday Half Marathon Classic this April 4, 2015, now being called Bob Lightburn Half Marathon Classic in respect to the 3 time winner and long distance runner back in the 60’s, Mr. Bob Lightburn. This year, it’s being called a clash of the legends, old versus new; justly called so, because old runners from the past will lace up their running shoes and square off against the new generation of runners. So, make it a date and come out to watch history in the making.

Until next week, God bless and have a safe weekend.