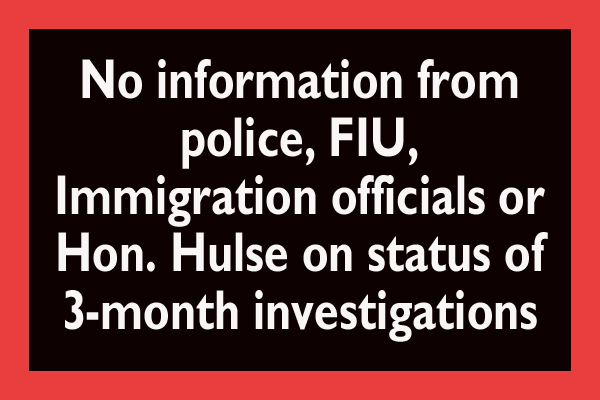 It has been almost three months since the “carefully guarded” investigations into the most recent passport scandal were launched in late September due to rampant allegations of corruption and irregularities within the Immigration and Nationality Departments.

Since then, details and updates in regard to the substance of the investigations have not been forthcoming – at least not as they were expected by certain members of the public.

Today, Amandala sought to find out what is the current status of the investigations and how those investigations have been progressing since the Penner passport scandal rocked the nation to its core in the latter part of 2013.

Of all the investigating bodies that are involved in the investigations – namely the Financial Intelligence Unit (FIU), the Auditor General’s Office, the Police Department and the Ministry (of Immigration and Nationality) itself – only one was able to provide us with any substantial information regarding the ongoing investigations into the circumstances surrounding the scandal, whose principal figure is a South Korean fugitive by the name of Won Hong Kim, incarcerated in a Taiwan jail.

Auditor General Dorothy Bradley provided us with the single update we were able to obtain. She informed us that at this time, they are “making progress” in the investigations, and that they are currently going through the thousands of files that are stored at the Immigration and Nationality Departments. Bradley stated that the process might seem sluggish because there are lots of files to examine, and she also explained that one of the major challenges that they face is that each file contains all the activities that took place during each specific day, which makes the process tedious for those involved.

Bradley did mention that they have already gone through a complete year of immigration and nationality files, starting from the present and going backwards. She said that the procedure should take another month, after which that part of the investigations is expected to be completed.

Bradley emphasized that if there are any reasons to proceed with disciplinary actions against anyone who is implicated in the investigations after this stage, then the authorities will proceed with that.

The Auditor General has invited the media to a press briefing on Wednesday afternoon at which she has pledged to provide the entire media with the latest updates in regard to her office’s role in the investigations.

Our attempts to acquire relevant information from the other investigating bodies were futile. We understand that Marilyn Williams is no longer the Director of the FIU, and no one from the office was available for comment on the FIU’s role in the investigations.

We were told that the Director of Immigration, Maria Marin, was in a meeting and would not be available for the rest of the day.

When we called for the CEO in the Ministry of Immigration and Nationality, Mrs. Candelaria Saldivar-Morter, we learned that she is currently on leave, and therefore was not available for comment.

The Acting Commissioner of Police, ACP Miguel Segura, told Amandala that he is simply “holding over” for the Commissioner, Allen Whylie, and therefore was not in a position to speak on the matter. ACP Segura advised us to check back with the Commissioner when he returns to office next week.

As for the substantive Minister of Immigration, Hon. Senator Godwin Hulse, who has been on the hot seat ever since the immigration scandal hit the roof, we reached him by text, but so far we have not gotten any response.

Hulse has famously maintained that he is “only Godwin and not God,” and swore that his Ministry and its officials are doing all that they possibly can to curb or thwart instances of corruption in the issuance of Belizean passports and nationality; however, up to mid-December, it was revealed that a Salvadoran national fraudulently got Belizean nationality in one day.

In response, Hulse contended that a thing like that “happens all the time.”

The investigations were ordered by Minister Hulse at the end of September 2013 on the heels of sustained pressure from the media and the public to probe numerous reports of irregularities which had been taking place at the Immigration and Nationality Departments under the watch of former Minister of State in the Immigration Ministry, now disgraced UDP Cayo Northeast area representative, Hon. Elvin Penner.

Using his authority as Junior Minister, Penner allegedly had facilitated a falsified Belizean passport and nationality for a jailed South Korean businessman in Taiwan – Won Hong Kim – who, by all accounts, had never set foot in Belize. He was subsequently sacked from Cabinet by his boss, Prime Minister Hon. Dean Barrow, for his role in the scandal.

However, Penner is yet to be indicted for what many Belizeans believe was criminal conduct.