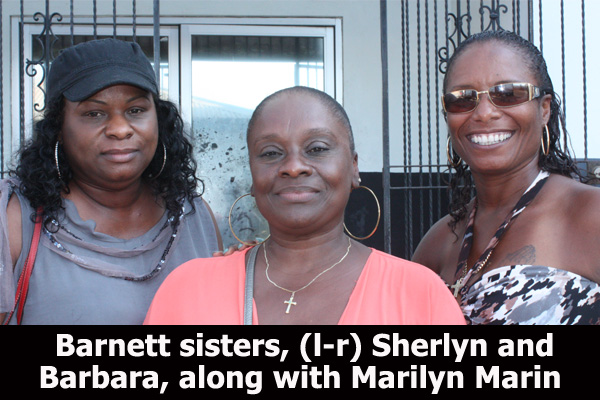 Paying a brief visit behind the zinc fence last Wednesday were some familiar faces of yesteryear when there used to be “Fire at the Barracks.” Earl “Mandingo” Barnett was a big football star on teams like BEC and White Label in the mid 1970’s, and his sisters, Sherlyn and Barbara, were among the beautiful female fans that adorned the perimeter of the MCC. In the above photo they are accompanied by their childhood neighbor and friend, Marilyn Marin, a sister of popular Krem personality Yaya Marin Coleman. Yaya said that “Babsie” used to baby sit the four Marin girls, and later introduced them to the football culture, Mandingo also becoming their super star. “Our families have remained extremely close and connected all these years,” said Yaya. The Barnett sisters are enjoying their visit home from the U.S., where Sherlyn resides in New Jersey and Babsie in L.A. Marilyn, a retired U.S. Naval Officer, now lives in Belize.