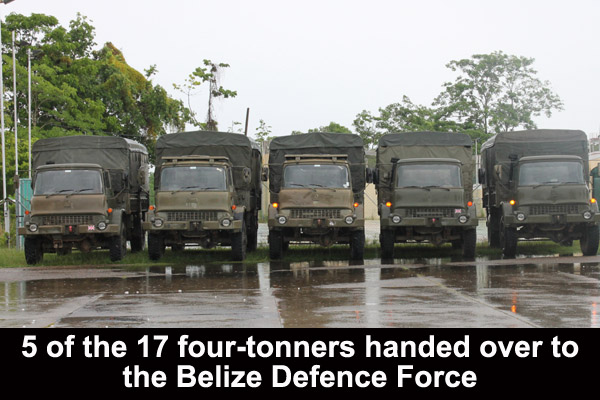 Brigadier General David Jones said that the donation resulted from an initial meeting with a member of the Ministry of Defense for the British Government.

“I told him that one of the critical lack of capacities that the BDF has is lack of troop-lifting vehicles,” Jones said. “And I noted that BATSUB had a number of these vehicles; they have scaled down and are not being used. We are in desperate need of these,” he added.

The initial plan was for the BDF to receive six of the vehicles, but that number was increased to 17 – almost triple the originally planned amount. Each of the four-tonners costs about BZ$300,000.

General Jones said that the donation could not have come at a more opportune time, as the BDF has been deploying soldiers in greater numbers along the borders recently and they didn’t have the vehicle capacity for the troops.

Jones said that mobility is less of a major issue for the BDF now, especially in the area of the Chiquibul Forest and other observation posts in Southern Belize. With the Mahindras they were using they spent more on fuel and had to make multiple trips to transport troops. Those are issues that they won’t have to face with the four-tonners, which will hold more men, thus requiring less trips to transport troops to their destinations.

British High Commissioner to Belize His Excellency Patrick Ashworth made remarks on behalf of the British Government. He said they are very pleased to be able to offer such a donation to the Belize Defence Force because it demonstrates that BATSUB stands shoulder-to-shoulder with the BDF.

Ashworth said that the vehicles are in excellent condition and are expected to provide the BDF with about 10 years of service. The British army will be getting six-tonners to replace the four-tonners they have handed over.

CEO in the Ministry of National Security George Lovell said that there needs to be proper equipment husbandry in order for the vehicles to last for the expected timeframe.

He said that even with the gracious donation from BATSUB, the BDF is still not where they need to be. For that reason, the Ministry of National Security has made a commitment to the BDF General to do all he can to try and get additional troop lifting vehicles for the Defence Force.

Lovell said that the donation has relieved some of the burden on the Ministry in its effort to finance new troop-lifting vehicles. He said the vehicles will greatly assist the BDF in providing the type of service they should be giving to the country in a timely manner.

He added that they are hopeful that with this gift and the commitment between BATSUB and the BDF, the relationship between the two entities will strengthen and the mutual support will continue.