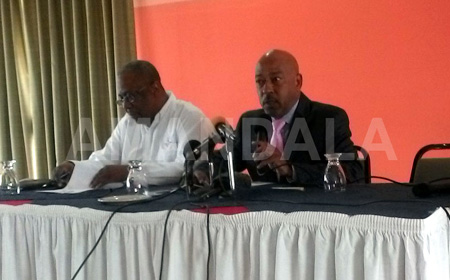 BELIZE CITY–Belize’s energy demand will grow substantially over the next few years, and the Public Utilities Commission (PUC) has been reviewing bids for 37 new projects from 22 companies which hope to make the final cut of designated enterprises that will be chosen to supply 75 megawatts of power over the next 10 years, including 15 megawatts from wind and solar sources.

The process opened last October, just over a year ago, and formal proposals were unsealed in June 2014.

Initially, there were 42 expressions of interest, including expressions from companies such as Belize Natural Energy and UNO Belize, but these did not submit formal bids.

This afternoon, Monday, October 20, 2014, the PUC unveiled the top contenders at a press conference held at the Radisson Fort George Hotel in Belize City.

From among the 22 companies, there have been just a handful of disqualifications, and the remaining companies were ranked based on the companies’ ability to effectively execute the project, as well as the price at which they propose to sell power to the Belize Electricity Limited (BEL), the premier power distributor in Belize.

Topping the scale for the best price was Ted Sorenson’s Southern Renewable Energy Limited (SREL), which has proposed three hydro projects for a cumulative capacity of 27.3 megawatts. The estimated cost of these projects is just over US$100 million.

Derek Davis, PUC’s Director of Electricity, notes that because the project is hydro-based, the company would not be supplying that full capacity year-round. Davis said that SREL is the only company which has operated in Belize before, having operated the Hydro Maya facility in southern Belize.

Sorenson’s company proposes to build a hydro facility above Mollejón, and two more on the Upper and Lower Swasey River, near Placencia, Stann Creek.

Next on the PUC’s agenda is a dispatch simulation exercise, via which they will develop models to see how the proposed projects would work over the next 15 years, and more importantly, what mix of projects will give Belizeans the best bang for their buck.

Following this exercise, recommendations will be made to BEL, which will engage the winning bidders in final negotiations for a binding power purchase agreement.

While SREL’s Chalillo 2 Macal River was ranked at the top with a score of 87%, the bid by GSR Energy Limited, whose local representative is Glenford Eiley, ranked second with 86.69.

Davis explained that this project proposes to use sugar cane harvested by Mennonites in Blue Creek, Orange Walk, to produce ethanol via a cogeneration facility for export. At the same time, the facility would produce electricity for the national grid. The ethanol, said Davis, would be an anhydrous fuel grade that could be used in cars.

The bid of Cohune Energy Limited, which we previously featured in the Amandala newspaper, was ranked 7th and is listed among those that would be subject to the dispatch simulation exercise.

Although 3N1’s project proposal to produce power while purifying sea water for consumption was disqualified from among the bids for firm energy, Davis told us that the PUC would still propose a pilot project based on this new technology. He said that the proposed technology, which was pitched to supply 25 MW of power to the national grid, has technically not been operational anywhere else in the world and so it is considered “too risky” to form part of Belize’s firm capacity energy mix. Davis said, however, that the proposal could be introduced on an experimental basis, and so 3N1 may not be completely out of the picture.

Most of the companies bidding to supply the 75 megawatts of new power are foreign-owned, with some of them having local joint venture arrangements.

John Avery, PUC Chairman, noted at today’s press conference that on October 7 of 2013, the PUC opened the process with a request for proposals, and there were no restrictions on who could submit proposals to satisfy the medium-term demands for electricity supply in the country.

He said that the bid document explained that the proposals must satisfy some 60 MW of firm capacity and 15 MW of intermittent renewable supply, which are to be added over the years, as the demand arises, with the purpose of securing adequate supply in-country to complement some of the supply from Mexico but also to enable the country to become self-reliant in satisfying its basic demand.

Avery said that the intent is also to implement the Government’s policy to promote clean renewable energy supplies in the country.

Avery explained that 4 companies were disqualified because they failed to score a minimum of 15 points on the management and technical component of the scoring grid. The rest were scored based on the least overall cost. They range from US$00.10 to US$00.30 per kilowatt hour.

Projects are also subject to environmental clearance requirements before they could be considered for implementation.

According to Davis, the PUC’s decision on the bids should be online tomorrow, Tuesday, at www.puc.bz.