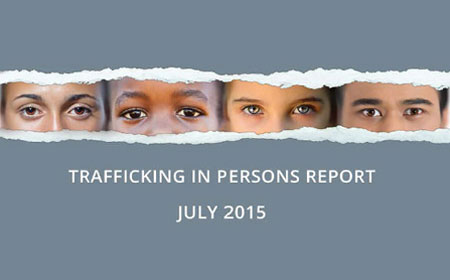 BELIZE CITY, Mon. July 27, 2015–Belize has received its worst ranking since 2006 in the Trafficking in Persons (TIP) report published by the US State Department – a tier 3 classification which could trigger sanctions against the country through withdrawal of funding or opposition to new funding sought from international financial institutions such as the International Monetary Fund and the World Bank, the July 2015 TIP report signaled.

Belize was among 18 countries downgraded this year, including Belarus, Comoros, and the Marshall Islands. Last year, 2014, Belize was placed on the tier 2 watch list, the stage before the final downgrade it received this year.

Belize was first ranked in 2003, when it received a tier 3 rating. However, it had since pulled itself to the tier 2 watch list before sinking again to tier 3 in 2006. In 2007, the country was upgraded to tier 2, and for the past 7 years, it has managed to stay out of the tier 3 zone, where it has now been placed with 22 other countries.

According to the ranking system, governments of countries on tier 3 may be subject to certain restrictions on bilateral assistance, whereby the US government may withhold or withdraw non-humanitarian, non-trade-related foreign assistance.

Also, some Tier 3 countries may not receive funding for government employees’ participation in educational and cultural exchange programs, and the US may also oppose requests for the provision of assistance (except for humanitarian, trade-related, and certain development-related assistance) made to international financial institutions, such as the International Monetary Fund and the World Bank.

In explaining Belize’s ranking, the 2015 TIP report contends that, “The Government of Belize does not fully comply with the minimum standards for the elimination of trafficking and is not making significant efforts to do so.”

It added that Belizean authorities did not initiate any new investigations or prosecutions in 2014.

“A prosecution from the previous reporting period, in which a suspect was arrested and charged with one count of trafficking involving a child, remained pending. Investigations of five human trafficking cases from previous years remained pending. Many off-duty police officers provide security for sex trade locales, which risks inhibiting victims from coming forward and law enforcement’s willingness to investigate allegations of trafficking in the sex trade,” the report said.

The report notes that in June 2014, 12 women were arrested and imprisoned after a raid on a bar without the women being screened for trafficking indicators, a practice that denied potential victims an opportunity to disclose exploitation.

During that same month, the UN Special Rapporteur on Trafficking in Persons issued a report based on an official visit to Belize to assess progress and challenges in combating human trafficking. That report cited concerns ranging from the absence of comprehensive victim identification protocols to the criminalization of immigrants leading to the detention and deportation of potential victims.

The TIP report says that while Belizean women and girls were subjected to sex trafficking by family members, the Government has not arrested family members engaged in this form of trafficking.

The report makes specific recommendations for Belize, including calls for Belize to “proactively [implement the anti-trafficking law by vigorously investigating and prosecuting suspected traffickers; and] publicly acknowledge and condemn instances of official complicity and take steps to hold officials complicit in trafficking accountable…”

It also calls on Belize to implement procedures to take trafficking victims to a safe location while conducting victim identification interviews, as victims often first appear as immigration violators and are reluctant to disclose details of their exploitation in a detention setting or post-raid environment.