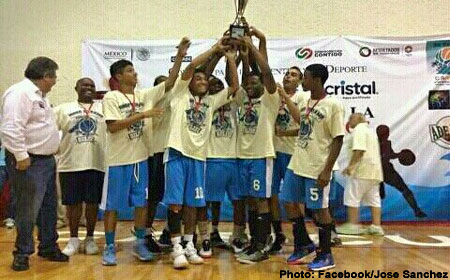 BELIZE CITY, Mon. July 20, 2015–Reports from Mexico are that a Belize U-19 basketball selection, led by coach, Brads Neal, captured the championship of the Copa de Cancun Pioneros 2015 tournament which included the recently crowned Mexican U-19 National Champs, Veracruz Marlins.

According to Brads’ report, the 4-day competition, from Thursday, July 16, to Sunday, July 19, “was fierce, but our boys defended the Jewel with pride and honor.” He went on, describing the game against the Mexican national champs, “That game was fierce and competitive, with unbelievable moments of greatness displayed by both teams. In the end, the strong will and determination of our young superstars prevailed.”

The Hoops Dreams Belize team is expected to arrive back home tomorrow, Tuesday, after which a press conference will be held at Rogers Stadium.