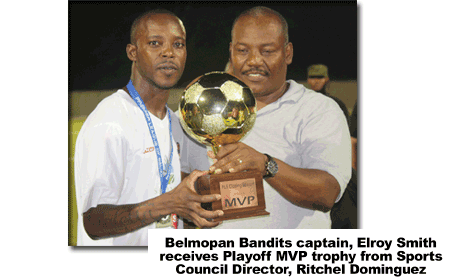 BELIZE CITY, Thurs. May 5, 2016–Even as the Football Federation of Belize (FFB) 9th Annual Congress continued struggling to elect a new president at the Princess Ramada Hotel in Belize City on Saturday, April 30, football action kicked off a half hour later than the 7:30 p.m. scheduled start of the Premier League of Belize (PLB) championship finals game 2 at the Isidoro Beaton Stadium between home standing Belmopan Bandits and the visiting Placencia Assassins.

Bandits goalkeeper, Shane Moody Orio (Member) had been elected on an early vote, along with Marlon Kuylen (Senior Vice President) and Darlene Vernon (Member); and Shane had been excused from the on-going Congress, in order to return to Belmopan for his game. 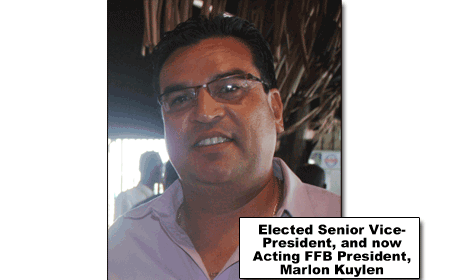 It was an exciting, fast paced, attacking game; and in the end, it was a case of close calls by Placencia, and effective execution by the Bandits, who claimed the 2-0 victory and the PLB championship. The Bandits got on the scorecard at the 29th minute when their Brazilian midfielder, Amilton Filho’s right footed blast from thirty-five yards out was too hot for Assassins goalie Anthony Williams to handle. The shot zoomed towards the top left corner, and Williams dived and managed to push it away; but the ball went high in front of goal, where fleet footed Bandits forward, Honduran Kervin Johnson was first on the spot as the ball fell, and he easily beat Williams from close range, striking the ball before it touched ground, into the Assassins’ goal. 1-nil, Bandits.

But the Assassins were undeterred, launching what could have been the game-tying strike about 6 minutes later. The play came from talented Assassins midfielder Delone Torres, whose penetrating dribbling (shades of Benedict) created havoc for the Bandits defence, before dishing right to Ashley Torres, whose shot from inside the eighteen just glanced off the left cross bar where it met the post, before being dumped by a defender. And the quick short corner feed led to a swerving left foot shot to the right corner by Placencia’s Luis “Baaka” Torres that was just out of reach of a diving Shane Moody Orio; but the ball just slid over the cross bar, leaving Shane on the ground, taking a long time to recover from the fall on the hard astro turf.

Fierce attacking sometimes leads to opening for counter-attacks, and on one of these, about 10 minutes into second half, Kervin Johnson on the left side sent a perfect cross goal pass to Jerome “Jarro” James for the Bandits to increase their lead, but Jarro’s shot towards the open goal from the edge of the eighteen hit the cross bar and rebounded out.

The Assassins were not backing down, and at the 74th minute they again came so close to equalizing, as back to back shots through a crowded Bandits goal area were somehow first repelled by an oncoming Shane, and then by a deflection off a defender, the ball sailing just over the cross bar.

With the 0-0 score in their previous meeting, a 1-1 draw would give Placencia the championship because of the “away goal” rule; so the game was still very much alive. Then at the 83rd minute, Bandits insert Randy Padilla, who once played for the Guatemala U-20 selection, was given just enough room around the top of the Placencia eighteen, and he unleashed a rocket to the right top corner that gave Placencia goalie Anthony Williams no chance, as it tightened the net to the jubilation of the Bandits’ bench and fans. And that’s the way it ended; 2-nil, and Belmopan Bandits FC is the PLB Closing Season 2015-2016 Champion.

Along with the championship trophies and medals for the players, individual awards were also issued in the post-game ceremony by special guest, Sports Council Director, Ritchel Dominguez.

When the Bandits’ championship celebration was over, there was still suspense in the air, as reports were received that after 20 rounds of voting, there was still a deadlock in the FFB elections.

By Sunday morning, we were informed that around 2:30 a.m., after 22 rounds and still deadlocked, CONCACAF representatives had decided, after consulting with FIFA, to call it a day, and appoint Senior Vice-President Marlon Kuylen as Acting President of the FFB until the next Congress in a year’s time, when the other two posts will be determined.

So, Belize football has a new champion, Belmopan Bandits FC, and a new face in the FFB president’s position, Marlon Kuylen. Congratulations all!

Football Players Association says club relegation-promotion pathway from FFB Inter-District to Premier League of Belize a must; calls on all clubs to register with...